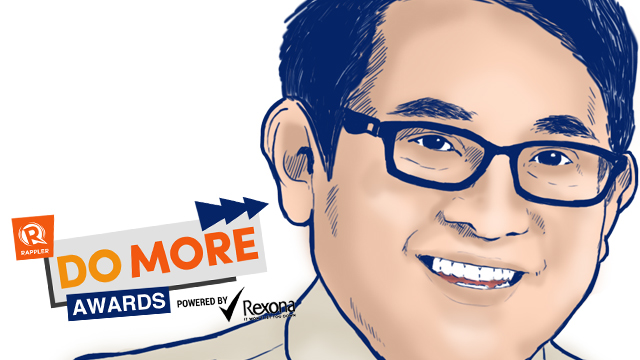 MANILA, Philippines – There’s no greater political stigma than to share the same surname with two Presidents.

But, Senator Pablo Benigno “Bam” Aquino IV is intent on making a name for himself.

READ: What can a 6th Aquino bring to the Senate?

At the age of 25, Aquino was appointed as chairman of the National Youth Commission, the youngest person in Philippine history to head a government agency.

Afterwards, he stepped out of the government and plunged into social entrepreneurship. His desire was to make a difference in people’s lives by enabling them to earn for themselves.

He founded The Hapinoy Program, a way to give micro-entrepreneurs access to 3Ms: money, market, and mentoring.

But soon, he realized that he could Do More.

“I saw that if we really want to open up access and opportunities to poor communities around the country, we need to do it through national-level policymaking,” Bam says. “I realized that needed to link the private sector with the government, and that’s what I’m doing now as a senator.”

At 36, Bam is now the second-youngest legislator to be elected into office.

What changes does Bam want to see in his lifetime? “I would like to see the Philippines achieve inclusive growth: to drastically lower unemployment, hunger, and poverty. I want to do it by giving Filipinos equal access to opportunities in education, livelihood, entrepreneurship, and decent jobs based here at home.”

It’s undeniable that family ties led him to politics. But Bam asserts that it’s his personal destiny as well.

“I just always knew that I wanted to help people,” he says.

Here are some questions we asked Bam:

Can you tell us about the first group of women that you worked with for Hapinoy?

They were shy, timid, and felt they had no access to opportunities. Eventually, the program taught them to believe in themselves and brought out their spirit, dignity, creativity, and willingness to help others. At the end of the day, this transformation is what The Hapinoy Program is all about. From feeling limited by their circumstances, our Hapinoy Nanays are now very empowered women who are able to provide for their families and also inspire others in their communities.

What's your favorite part about your work as senator?

The fact that every day is a new opportunity to bring about meaningful change on a large scale. Every day counts, and not a day is wasted--whether we're doing legislative work, convening stakeholders, consulting with communities in the provinces, or reaching out to media and the public.

What challenges are you facing right now as one of the youngest senators?

As you know, the Senate is facing many challenges right now, stemming from an old system that has become corrupted. We're actually excited to introduce change in an institution that at first seems slow and set in its ways.

We keep our ears to the ground and study our options, but we also aren't afraid to be bold in our proposals.

What does it mean for you to Do More?

I'd like to echo the battle cry of “Why Not Forum,” which I co-founded years back. The slogan of Why Not is: “Think new thoughts. Share big dreams. Do brave things.” – Rappler.com

The DO MORE Awards is Rappler's first opportunity to commend Filipino achievers who have the courage to challenge the status quo. It aims to honor those who take the initiative to go beyond the call of duty. What they do inspires others around them. Do you know a Civic Hero like Bam Aquino? Nominate them for the Rappler Do More awards until October 5!