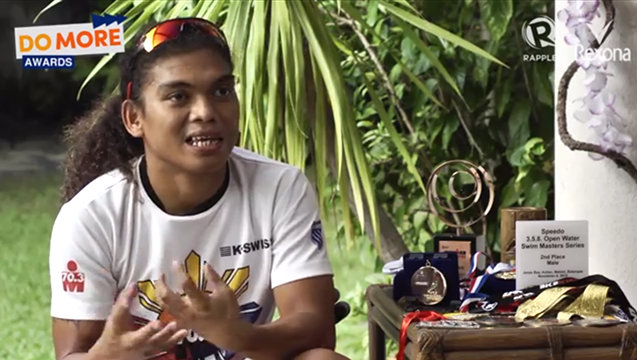 Arnel Aba is a a swimming coach, a national athlete, and a record-holder at various international swimming competitions. On any given day, he can easily outswim and outbike average marathoners.

He challenges the status quo by accomplishing all these feats with only one leg.

Nine years ago, Arnel was a jeepney driver in Iligan City. He was fond of drinking, drugs, and hanging out with his friends. Then, one afternoon, he lost his leg in a near-fatal accident.

During therapy, his doctor prescribed swimming sessions to regain his strength. Arnel met Cecil Miquiabas, a swimming coach at the Mercy Healthplex SeaWolves Swim Club. Cecil gave Arnel free access to the pool and encouraged him to train as an athlete. Soon, Arnel found himself swimming towards a brand-new direction.

Watch a profile video on Arnel and the other finalists of the Challenger category below.

A new lease on life

“Sa swimming, malaking tulong sakin na nagbabago lahat ng pagkatao ko (swimming was a huge help in turning my life around),” Arnel narrates. He learned to be more disciplined as he focused on improving his times on the track and the water.

Arnel’s brand-new outlook affected not just his game, but his personal life as well. When he had both use of his legs, Arnel often ignored his responsibilities to his parents. But now that he’s a national athlete, he was able to earn enough money to provide for his family.

Arnel now gets to fulfill some of his own dreams, like traveling. He has flown to Malaysia, Singapore, India, and Thailand, to represent the Philippines in various swimming jaunts.

As a national athlete, Arnel follows a rigorous training schedule at the Philsports Complex in Pasig. But on weekends, he takes time to teach swimming to children and adults. He has launched two swimming programs: the Arnel Aba Learn to Swim Program and the Arnel Aba Advanced & Competitive Program.

“Nagpursigi talaga sila. ‘Ito ngang instructor ko marunong lumangoy, nagcocompete, how about me pa kaya na buo yung katawan?’ (They really strive harder. [They say] ‘my instructor can swim and compete with one leg, I have two legs so why can't I do the same?')" Some of Arnel's students now compete in provincial swim meets.

In the long run, Arnel hopes to finish a full 5150 triathlon (which consists of a 1.5k swim, a 40k bike and a 10k run) and to earn more medals for swimming events. He also looks forward to seeing more differently-abled athletes excelling in their field.

He says, “Kaya ding mangarap ng ganun kataas (I can aspire for great heights, too)." – Rappler.com