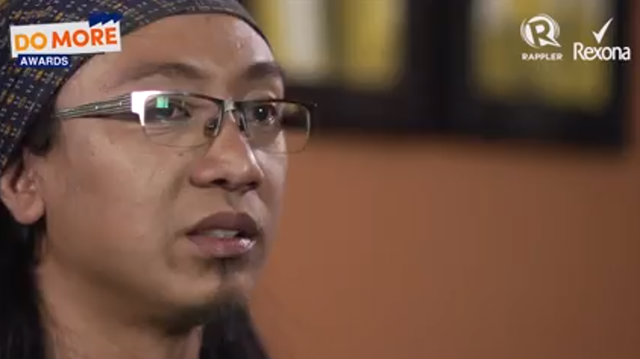 AG Saño is known as the Dolphin Guy - the artist responsible for some of the most ubiquitous street murals in the Philippines. These murals are not just beautiful, larger-than-life images of dolphins, rainbows, and dreamscape visions – they are concrete messages of conservation and peace.

Back in 2007, AG was living in Florida, working as photographer for the Disney Company. By 2010, he had resigned and was doing marine research at the Babuyan Islands. During this stint, he learned that 23,000 dolphins were being slaughtered in Japan every year. Out of grief, he decided to pay tribute to the dolphins by painting his first mural on the island.

“When I went back to Manila, naisip ko na i-match yung number ng dolphins na hinuhuli nila sa Japan, (I though of matching the number of dolphins that they were capturing in Japan),” AG says. “I committed to paint one dolphin for each one that they capture.”

What began as AG’s personal mission has transformed into a nationwide community effort.

Watch a profile video of AG and the other finalists of the Artist category below.

To complete the project, AG invited other artists to paint more walls with him. Over time, these collaborators also became active supporters of AG's advocacy.

One day, a friend invited him to paint a mural in a UP village restaurant. AG recorded the project on video, and sent to to CNN. When the feature was broadcast, support from Filipinos locally and abroad started pouring in. The first murals became a source of pride and inspiration for the global Pinoy community.

In one of the mural sessions, AG also met some Muslim Filipinos. Upon hearing their stories, AG saw an opportunity to start painting a new series murals. This time, it will advocates the rescue of his countrymen.

“Nalaman ko yung mga plight nung mga kapatid natin sa Mindanao. Nakita ko yung effect nung gera, yung effect nung violence, especially sa children. Marami sa kanila hindi na nakakapasok, marami sa kanila hindi na nabubuhay ng normal, in some cases some of them get killed sa crossfire ng gera between different groups (I learned of the plight of our brothers and sisters in Mindanao. I saw the effects of war and violence, especially to the children. Most of them cannot go to school or live normally. In some cases, some get killed in crossfires between different groups)."

AG realized that someone needed to offer hope to the children. He started traveling to conflict-riddled towns, holding art workshops and creating peace murals with the locals. He also extended his painting sessions to become part of school rebuilding efforts.

More than creating bright, colorful classrooms, AG believes that painting on the school walls stands for something more.

Through the project, AG shares that students and even school teachers have become protective and personally accountable to the classrooms that they helped paint.

AG’s latest peace project is the mural that runs along the entire perimeter of the AFP (Armed Forces of the Philippines) headquarters. His initial idea was to simply cover up the vandalized areas. It grew into a project that involved thousands of children and adults painting different sections of the wall.

AG simply hopes to make people more aware of what’s happening around them. “Napakadaming Pilipino na walang pakialam (so many Filipinos don’t care),” AG laments. Everyday, he would see at least one person throwing away a candy wrapper or cigarette butt carelessly. These little acts lead to floods and loss of lives.

But AG’s mural is also a little act that led to something big. Through perseverance and optimism, he was able to Do More. “Naniniwala lang kami na pag gumawa ka ng mabuti, susuportahan ka ng panginoon, ng universe, ng libo libong tao.” (We just believe that when you do good, the Creator, the universe and other people will conspire to make it happen.)

From painting about silent, peace-loving creatures, AG has moved forward to advocating peace itself. From saving the seas, AG has found a way to spread his message about saving humanity. – Rappler.com