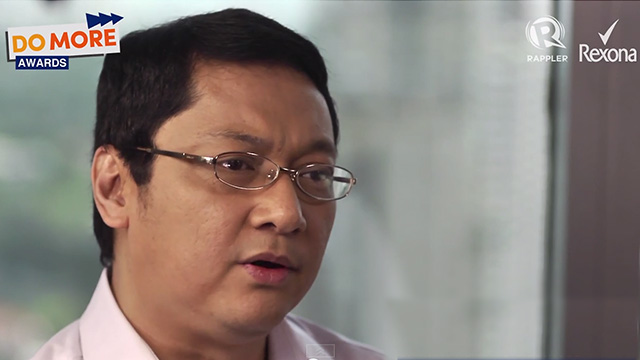 He is a passionate educator with a vision to mold world-class students; in his words: those who “will keep on asking for more learning for as long as they live.”

What started as a tutorial center in 2001 is now four campuses situated around the province, distinct for its unique curriculum (humanities, foreign language and personal development are taught in grade school levels), e-learning, a full-pledged honors program, and an examination system which Rolando adopted from years of studying abroad.

Rolando crafted a curriculum that prioritizes the study of local heritage and as well as various cultures around the globe. He also introduced the two-exam system from pre-school to high school levels, where a student is not required to take Part 2 of the quarterly examination if Part 1 satisfies the cut-off mastery grade of 88%.

Today, across the various Darwin campuses, all of Rolando’s graduates get into top schools, such as UP, Ateneo, La Salle, and UST.

A culture of learning

Rolando formerly taught Political Science in the University of the Philippines (UP). He also studied at Japan’s Osaka University, Netherland’s Leiden University, and England’s Cambridge University. He was able to observe how culture played a huge part in these countries’ education philosophy.

For example, in Osaka, he saw how students attended class rigorously and excelled on the basis of obedience. In Europe, students had the option of not attending class, but would go to the libraries religiously and study on their own. Rolando realized that in the Philippines, the case was a little bit different.

“We are neither Western nor Asian,” Rolando says. “Therefore, I think it’s important for our education system to realize the culture of the Philippines.” According to Rolando, our grading system should be altered to make students more independent, yet hungry to learn more.

He believes that the way to do this is to start them young. “As early as the toddler level, we really introduce [our students] to museums, to things historical so that they will start loving the country,” Rolando says. “Education should not be confined to things academic… education should be able to help define the humanity of every individual.”

As expected, Rolando’s unorthodox ideas were initially met with hesitation. “A lot of parents were raising the question ‘why should we teach young people humanities when it is required in the country beginning college level only?’”

Today the K-12 program of the Department of Education (DepEd) already mandates humanities programs for Grade 11 and 12 levels. “It is the very testimony that to teach humanities even at the basic education level is important,” Rolando says.

Watch a video of Rolando Dela Cruz and the other finalists of the Innovator category below:

A culture of sharing

Another unique aspect of Rolando’s schools are the textbooks. Materials for the Humanities, English, and Social Studies courses were written by Rolando himself.

“One problem in our country is that we don’t have enough budget for education,” Rolando explains. “And one area of need is the books."

“Now at this day and age of information technology, one thing that I want to see implemented in this country is to make all the textbooks in Philippine basic education free…The simple thing to do is to write it, make sure it is very good, and start uploading it.”

Because the books are easier to reproduce and download, his dream to offer free books to all students is realized.

“We are open to sharing the things that we are doing in school,” Rolando says.

A culture of excellence

By introducing solutions into his own school system, Rolando hopes to set an example for other schools around Bulacan, and the Philippines.

At Darwin, he aims to foster a culture of excellence. He says: “We started [that culture] way back in early 2000. If that’s possible in one school, it is very possible in any other school. Not only in this country but anywhere in the world.”

For him, Doing More requires innovation. “It is not enough that we are always contented with ‘bahala na’ or ‘pwede na yan’,” he says. “Every school must be involved with the idea of social re-engineering.”

For Rolando, competence, creativity, and the wise use of technology will make this possible. – Rappler.com