'The hangars give China the option to base or rotate military aircraft on the islands,' an analyst tells Rappler 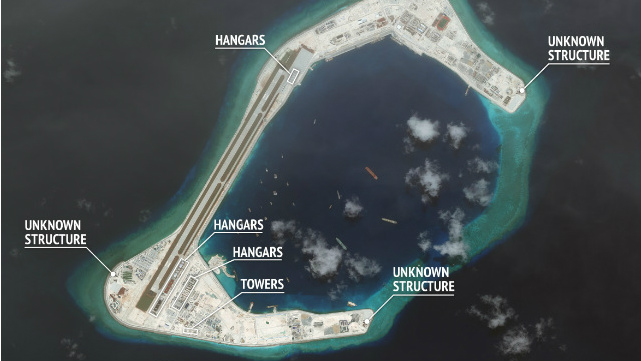 MANILA, Philippines – China is building hangars in the disputed West Philippine Sea (South China Sea) as it prepares its artificial islands for military aircraft, based on photos released by an independent think tank.

The Asia Maritime Transparency Initiative (AMTI) of the Center for Strategic and International Studies (CSIS) said China is undertaking "the rapid construction of reinforced hangars" in 3 features of the Spratly Islands in the West Philippine Sea.

China is constructing these hangars on the artificial islands it has built to assert de facto control over the West Philippine Sea.

"Each of the 3 islets will soon have hangar space for 24 fighter-jets plus 3-4 larger planes," the AMTI said in a story titled, "Build It and They Will Come: China Preps Spratlys for Military Aircraft."

In this article, the latest satellite image by CSIS/AMTI and DigitalGlobe was dated July 24.

That was nearly two weeks after an arbitral tribunal in The Hague, Netherlands, on July 12 struck down China’s expansive claim over the disputed waters.

The July 24 image shows 3 sets of hangars on Zamora Reef (Subi Reef). Towers and 4 unknown structures can be seen there as well.

SUBI REEF. Most of the hangars are being constructed at the southern end of the runway, with a few small hangars at the northern end, the AMTI says of this satellite image dated July 24. Photo courtesy of CSIS/AMTI and DigitalGlobe

MISCHIEF REEF. Construction of hangars at Mischief Reef is at an earlier stage, the AMTI says of this satellite image dated July 22. Photo courtesy of CSIS/AMTI and DigitalGlobe

On Kagitingan Reef (Fiery Cross Reef), a photo dated June 3 shows 4 sets of hangars. Alongside these hangars, one can find towers and 3 unknown structures.

FIERY CROSS REEF. Construction of fighter-jet hangars appears complete at the southern end of the runway and is well-advanced along the middle of the airstrip, the AMTI says of this satellite image dated June 3. Photo courtesy of CSIS/AMTI and DigitalGlobe

M. Taylor Fravel, political science professor at the Massachusetts Institute of Technology, explained that the hangars "were not constructed directly in response to the July 12 ruling."

In an e-mail to Rappler early Wednesday morning, August 10, Fravel said that construction of the hangars "probably began at least 6 months ago, and photos from May and June show completed hangars on Fiery Cross Reef."

Fravel, an international relations expert who studies China and East Asia, added that the construction of the hangars "is part of the overall development plan for the islands."

"In particular, in the future, the hangars give China the option to base or rotate military aircraft on the islands, either on a temporary basis or a permanent basis. The key question is not the construction of the hangars, which is expected given the airfields, but how China intends to use them," he said.

"In the short-term, the construction of hangars will not affect peace and stability," Fravel added.

"The real question concerns whether China decides to use these facilities for military purposes, as forward bases for Chinese airpower that could directly threaten the other states that occupy land features in the South China Sea," he said.

Experts at a recent Chinese-organized forum in Singapore, however, said China can use its artificial islands for "public service" in the Asia Pacific. They said these islands can help China and its Southeast Asian neighbors in boosting disaster response, among other things. – Rappler.com