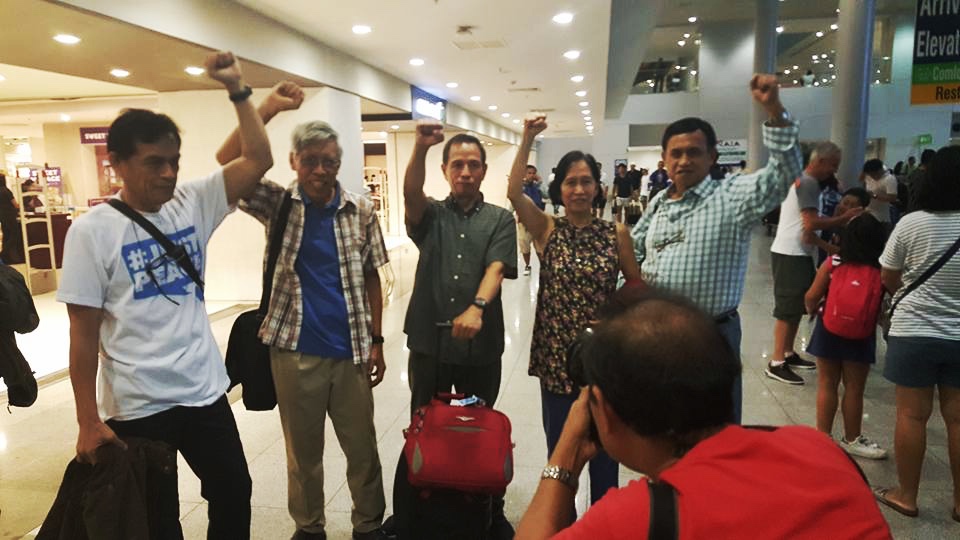 FISTS UP IN THE AIR. Top communist leaders Benito and Wilma Tiamzon (3rd and 2nd from left, respectively) lead other newly-freed NDF consultants in raising their fists at the NAIA 3 before they fly to Oslo for the historic resumption of the peace talks between communist rebels and the Philippine government. Photo courtesy of Reddie JS

At 8 pm, Saturday, the Tiamzons, both top leaders of the New Peoples Army (NPA) and members of the Communist Party of the Philippines (CPP) Central Committee, embarked on their first international flight to participate in the historic resumption of peace talks between communist rebels and the Philippine government in Oslo, Norway.

"Oo, first time ko na makalabas sa bansa (Yes, it's my first time to leave the country)," Benito told Rappler in a phone interview shortly before he boarded his flight.

The Tiamzons were arrested in Cebu on March 22, 2014, over standing warrants of arrest for alleged multiple crimes against humanity. The NDF has argued that the two are their consultants in the peace talks covered by the Joint Agreement on Safety and Immunity Guarantees (JASIG), which guarantees them safe conduct as part of the negotiations.

They were given temporary freedom Friday, August 19, to participate in the peace talks.

Three other newly-freed communist leaders who will participate in the talks will join them in the flights on KLM Royal Dutch Airlines and Cathay Pacific. They are Renante Gamara, Alan Jazmines, and Adelberto Silva.

The rest of the 20 consultants, who were given temporary liberty from detention a few days before the 5-day peace talks, will follow the first batch, according to Benito.

But whatever inconvenience they will experience in the air is nothing compared to the lifetime struggle that they waged in the hills, in Tiamzon's words, the "fundamental national and democratic change for the country."

In Oslo, the Tiamzons and the NDF panel will negotiate a peace deal with the government negotiators, hoping to address the root causes of the longest-running insurgency in Asia.

The formal talks will tackle the following agenda, according to the peace negotiators who initially met in Oslo on June 15:

Excited to reunite with Joma Sison

The communist leaders are excited about their trip to Oslo because of two reasons. First, it will be Benito's first time to see CPP founding chairman Joma Sison and other CPP members who have lived in exile in The Netherlands since 1987. He is also optimistic about the prospects of the peace talks under the Duterte administration.

(Of course, we're excited to see them again, especially because of the important developments at present. Because of this, we expect that our reunion will even be happier and more interesting.)

Sison feels the same way for his old friends and comrades.

"I am excited to see and welcome them in Oslo. It has been a long while since I saw them. Some 3 decades already. After the happy greetings and reminiscences, we will start to work together for the peace negotiations," Sison said in an online interview with Rappler shorlty before the NDF consultants boarded the plane.

According to Sison, the Tiamzons greeted him personally soon after he was released from prison on March 5, 1986. He recalled discussing with them the possiblity of peace negotiations with the Cory Aquino government in 1986.

"So, they are acquainted with the subject of peace negotiations. They are knowledgeable about the ceasefire negotiations in 1986. They have expertise about this," Sison said.

(Perhaps, how we can reconcile our minor differences – nature of the ceasefire, conduct of the two ceasefires – when we meet there).

Duterte has restored the unilateral ceasefire with communist rebels effective 12 am, August 21.

"The duration of the ceasefire will last for as long as necessary to bring peace in the land and also in order to provide an enabling environment for the success of the peace negotiations that will start in Oslo, Norway, on August 22," Chief Peace Adviser Secretary Jesus Dureza said in a press conference on Saturday, hours before flying to Oslo.

The government's announcement comes a day after the CPP-NPA-NDF declared a 7-day unilateral ceasefire effective until 11:59 pm of Saturday, August 27.

Benito gave assurances that this time around, the ceasefire will work as both parties seek to expedite the peace process.

He added that the CPP-NPA-NDF's aspiration is to come up with important agreements and to push forward the peace process which has been stalled for almost 4 years. – Rappler.com