Leticia Ramos-Shahani: The woman who competed with the best

'Letty' made a name for herself in diplomacy and politics, and championed culture and women's rights 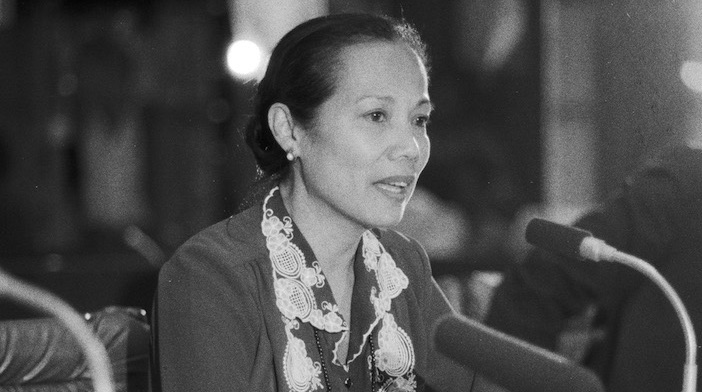 MANILA, Philippines (UPDATED) – The world of diplomacy, she once said in a speech, is "not a woman-friendly" profession. "We had to compete with the men," Leticia Ramos-Shahani recalled, "which I think I did quite successfully, if I may say so."

Born to a prominent family and a sister of former president Fidel V. Ramos, "Letty" made a name for herself in diplomacy and politics, and championed culture and women's rights.

She was an ambassador, a key official of the United Nations (UN), an undersecretary of the Department of Foreign Affairs, and a senator. At the Philippine Senate, Shahani made history by becoming the first female Senate president pro tempore, holding the position from 1992 until 1996.

A widow who raised her 3 children almost single-handedly, Shahani lost her writer-husband Ranjee Shahani after only 8 years of marriage.

At the time of her death, Shahani was a member of the board of directors of the MECO in Taiwan, and the vice chairman of the Philippine Navy Board of Advisers.

She is survived by her 3 children, Ranjit, Chanda, and Lila.

Ranjit had served as a vice governor, congressman, and provincial board member of Pangasinan. Lila is the incumbent secretary-general of the Philippine National Commission to the UNESCO. Chanda went into real estate business.

From UP to Wellesley

Shahani grew up in a family of thinkers and public servants.

Leticia Valdez Ramos was born on September 30, 1929, in Lingayen, Pangasinan. She was the 2nd of 3 children of former congressman and ex-foreign affairs secretary Narciso Ramos and teacher Angela Valdez.

She finished her elementary and high school education at the University of the Philippines (UP). She then studied abroad, earning a bachelor's degree in English literature at the Wellesley College, USA, in 1951, and a master's degree in comparative literature at Columbia University in 1953.

In 1962, she graduated with a doctorate in comparative literature at the University of Paris as a scholar of the French government. Her doctoral thesis was defended with the highest honors.

In 1968, she married Indian professor and writer Ranjee Shahani.

After teaching stints at UP and in New York schools, Shahani joined the UN in 1964, working at its Division of Human Rights.

WOMEN'S RIGHTS. In this file photo, Letty Ramos-Shahani (2nd from left) is seen with top diplomats led by then foreign secretary Carlos Romulo (3rd from left) at the UN headquarters in New York in October 1974. File photo from UN

Five years later, she became a member of the Philippine delegation to the UN, working in the areas of security, socio-economic issues, women's issues, and culture. She also was the dean of the Lyceum of the Philippines graduate school, from 1970 to 1975.

In 1975, she was named ambassador to Romania, the first woman appointed to the post and the Philippines' first ambassador to Eastern Europe. She concurrently served as Philippine ambassador to Hungary and the then-German Democratic Republic or East Germany.

In a 1989 New York Times interview, Shahani recounted how Romania "didn't know what to make of me" as ambassador – the first woman foreign envoy that country received. She was also the Philippines' first ambassador to a communist country, the Times noted.

Three years later, in 1978, she became the Philippines' ambassador to Australia, serving until 1980.

She returned to the UN soon after, becoming its assistant secretary-general for social development and humanitarian affairs from 1981 to 1986.

In 1985, she served as secretary-general of both the UN 3rd World Conference on Women in Nairobi, Kenya, and the UN 7th Congress on Crime Prevention and Treatment of Offenders in Milan, Italy.

A decade later, she headed the Philippine delegation to the 4th World Conference on Women in Beijing, China.

Back home, the 1986 People Power Revolution was unfolding. Shahani, a cousin of dictator Ferdinand Marcos, recounted that she had voiced support for Corazon Aquino during a visit to her home province, Pangasinan.

''It turned out I was the first high-ranking Filipino official to come out for her, and it was quite stunning, and I didn't, honestly speaking, realize the drama it would create,'' she told the New York Times.

After the ouster of Marcos, then President Aquino appointed Shahani undersecretary of the Department of Foreign Affairs (DFA) in 1986. She also headed the NCRFW (now the Philippine Commission on Women) in the same year.

She ran for senator in 1987 and won, placing 7th in the polls and garnering over 11 million votes.

She was reelected to a fresh 6-year term in 1992, the same elections that her brother Fidel, or "Eddie," as he is fondly called, won as president. That year, Shahani made history by becoming the first female Senate president pro tempore, holding the position until 1996.

Shahani received numerous awards throughout her career, including being one of the Ten Outstanding Women in the Nation's Service (TOWNS) in 1974, the DFA's Gawad Mabini Award in 1995, the Rafael Salas Population and Development Award, and the UN Population Award in 1996.

She was also conferred the Order of Teodor Vlademirescu, Class I by Romania in 1978, the French Legion of Honor, Order of Chevalier in 1992 and Order of Commander in 1996, as well as the Lazo de Dama de la Orden de Isabel la Catolica by King Juan Carlos I of Spain in 1996.

After her terms in the Senate, Shahani continued to promote her advocacies and returned to the academe.

She was also the chairperson of the committee on culture of the UNESCO National Commission-Philippines from 2002 to 2004.

From 2008 to 2011, she was the dean of the College of International, Humanitarian and Development Studies of Miriam College.

In May 2015, her daughter Lila announced that the ex-senator was diagnosed with stage 4 colon cancer. – Rappler.com