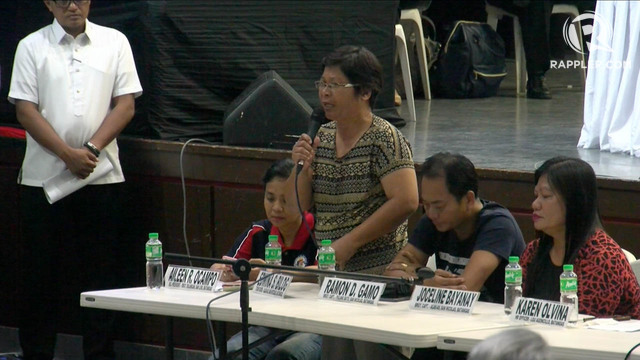 APPEAL FOR HELP. Edwina Bilog, an evacuee from San Nicolas, Batangas, shares to lawmakers on January 22, 2020, how difficult life has been for her in the past days since Taal Volcano erupted. Photo by Rappler

BATANGAS, Philippines – Evacuees barred from returning to their lakeside villages in Batangas could not stop their tears on Wednesday, January 22, as they urged lawmakers to help them go back to fishing in the lake around the restive Taal Volcano.

Edwina Bilog, who hails from Barangay Alas-as in San Nicolas town, could barely finish her sentences as she told members of the House of Representatives that fishing is a way of life for people in her village. (WATCH: Fishermen risk lives for catch around restive Taal Volcano)

(I am wholeheartedly appealing to you all to please help us. We won't be able to send our children to school if we wouldn't be able to fish there.)

Ramon Gamo, captain of Barangay Pulang Bato, also made a similar plea. He hopes his people would once again be allowed to catch tilapia and tawilis in Taal Lake surrounding the volcano, over which Alert Level 4 is still raised.

(I hope you'll no longer prohibit us from fishing there because that's our livelihood. And in case you let us fish again, that would allow our barangay to recover much faster.)

The House invited several evacuees and local officials to attend its plenary session held at the Batangas City Convention Center on Wednesday to directly listen to their stories. (WATCH: LIVE: House holds session in Batangas amid eruption of the Taal Volcano)

During the session, Daniel Reyes, mayor of Agoncillo, Batangas, shared that despite the lockdown imposed on his town and 10 others, many of his constituents still try to sneak in just so they could feed their pets and livestock.

Reyes hopes the House would be able to allocate funds for animal rescue.

"If we leave them, they die, which will add more time to the rehabilitation process. I humbly suggest that funds be allocated to retrieve these animals for government purchase or some other equally doable solution. As for the domestic animals, they too must be rescued because they are also part of the family," the mayor said.

Reyes also said evacuees need medical and psychological interventions to "help us cope with the situation we are now in."

(The relief and response efforts now are strong, but we're still weak in the area of rehabilitation.... You know that the changes are institutional in nature, but we'll guarantee that even if we're no longer in Congress, these changes will continue.)

During the session, the lawmakers adopted House Resolution (HR) No. 655 calling for the "immediate release" of funds to be used for the complete rehabilitation of the communities affected by the Taal Volcano eruption.

The resolution was penned by the legislators representing the 6 districts in Batangas, who also filed a bill on Wednesday that seeks to allocate P30 billion from the National Treasury as supplemental budget for the Taal Volcano eruption. This is in line with the request of President Rodrigo Duterte.

Lawmakers also adopted HR No. 662, which expresses the "support and commitment" of the House to work with all the concerned agencies to pass the proposed supplemental budget "to expedite effective and responsive assistance" to affected residents.

Alert Level 4 for Taal Volcano means there could be a hazardous eruption "within hours to days.” The volcano's level of sulfur dioxide emission has been lower for two days now, but state volcanologists said a longer trend or pattern must be observed first.

Batangas and its neighboring province Cavite are still under a state of calamity. (READ: How to stay safe during volcanic ashfall)

More than 39,000 families remain in evacuation centers, while the cost of agricultural damage so far is at P3.06 billion. – Rappler.com