PNoy's trial balloon? 'Abaya could be next president' 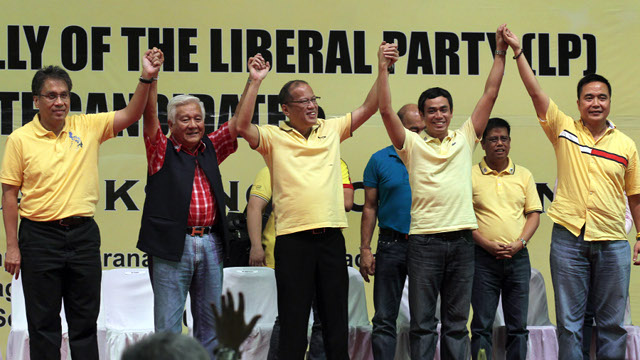 President Benigno Aquino III released a trial balloon at the Liberal Party (LP) proclamation rally here on Monday, September 24, when he heaped praises on his incoming transportation and communications secretary – who is not running for any provincial post – than the local candidates for whom the event was intended.

In fact, he talked more about Abaya than LP's 2013 bets in the province. The President highlighted Abaya as a son of Cavite, and emphasized that products of the province are on a league of their own.

"Baka ikaw na rin ang susunod na magiging pangulo," he joked Abaya, causing the audience to cheer. (You might be the next president.)

Aquino failed to mention that Abaya's maternal great grandfather, Emilio Aguinaldo, was the president of the Philippines' first republic.

On stage with them was LP president Mar Roxas, who gave up his presidential bid in 2010 to give way to Aquino, and who had been assumed as LP standard bearer for 2016.

But Aquino's statement about Abaya was made further interesting when, later on in his speech, he thanked Caviteños for Abaya's services, but said he would return Abaya soon.

Abaya is on his last term as congressman of Cavite's first district, a post held by his father Plaridel also for 3 terms before him. He was recently appointed by Aquino to head the Department of Transportation and Communications.

Aquino also took the time to cite Abaya's credentials in his speech, mentioning that he finished high school in Philippine Science, topped the Philippine Military Academy exams, and studied in the US Naval Academy in Annapolis before completing his master's degree in engineering in Cornell University and his law degree from Ateneo Law School.

He praised Abaya's dedication to good governance, citing his support for the impeachment complaint against former President Gloria Macapagal-Arroyo. He said Abaya fought against corruption and continued to fight for what he believed in even when there was little chance of pushing for her impeachment.