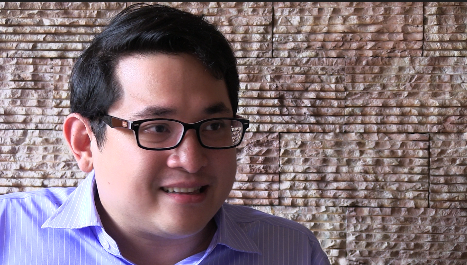 MANILA, Philippines - Right before the week of the filing of certificate of candidacies (COCs) for the 2013 elections, the Liberal Party welcomed two new members.

Senatorial hopeful Aquino told Rappler that he took his oath in front of the President and Interior Secretary Manuel "Mar" Roxas, the LP president. The 35-year-old Aquino said he was "excited" to be a member of the ruling party that has coalesced with the Nacionalista Party for the 2013 elections.

He said he joined the party because he believed in its platforms and what the President has started for the country.

"I can't really imagine myself not being in the President's party," he told Rappler in a phone interview. "The goal has always been to be part of the president's slate."

Bam Aquino's father, Paul, is the younger brother of the late Ninoy Aquino, the President's father.

Another presidential relative, Margarita "Tingting" Cojuangco, is running for the Senate but under the opposition United Nationalist Alliance. Cojuangco is the wife of the President's uncle, Jose "Peping" Cojuangco Jr.

While he did not take the oath alongside Madrigal, Bam Aquino confirmed that she too took her oath before the President.

Madrigal is a former senator and a critic of former President Gloria Macapagal-Arroyo.

LP sources have confirmed that both Aquino and Madrigal are part of the senatorial slate that the party will be fielding, although the line up will be officially announced on Monday, October 1 yet. Candidates will begin filing their COCs on the same day.

Bam Aquino said that if he were to succeed in his senatorial bid, he would contribute to the matuwid na daan that the President has been working towards.

"Part of this journey hopefully to be part of the government again is really to continue the good things that he's doing," he said. "We all need to pitch in and do our share."

Aquino is the former Chairperson of the National Youth Commission of the Philippines and is a founder of the multi-awarded social enterprise The Hapinoy Program. He was recently named among the 10 Outstanding Young Persons of the World.

There is one more free slot in the LP's slate which is reserved for Nationalist People's Coalition's Sen Loren Legarda. Legarda, who has been announced as a guest candidate of LP's rival slate United Nationalist Alliance (UNA), has yet to decide if she will join the administration ticket. - Rappler.com