Bam 'open' to disagree with PNoy 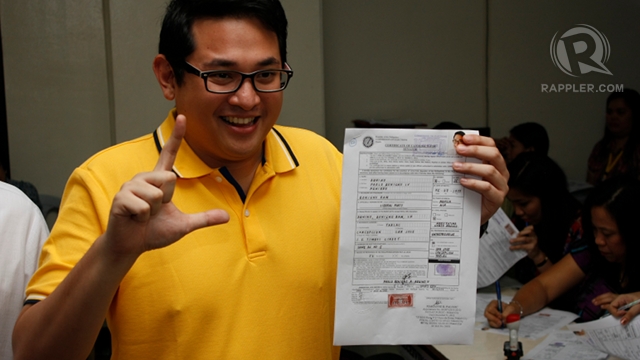 PNOY'S COUSIN. Bam Aquino files his certificate of candidacy at the Comelec. Photo by Don Regachuela

MANILA, Philippines – The Senate subjects Malacañang to checks and balances. How will a senator do this if he is not only the President's party mate, but also his cousin?

Categorically asked if he is willing to criticize the President on specific issues, Aquino said: “It's a hypothetical question. I don't know what I will criticize him on. But definitely, I think, our stance will be our own stance.”

“Obviously there will be times when we might not agree on things, but at this point, the reforms that he's done are things that we want to push through,” the senatorial hopeful said.

One issue that the executive branch can improve on, according to him, is the government's conditional cash transfer or Pantawid Pamilyang Pilipino program. 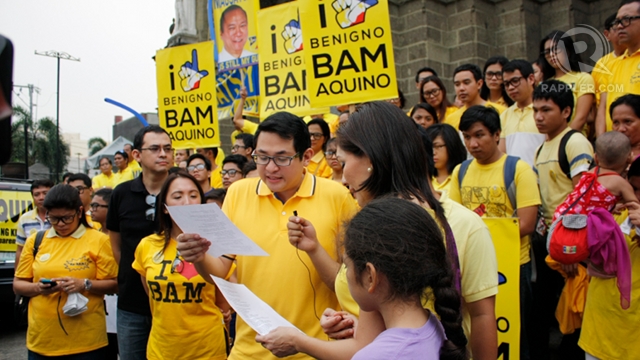 YOUNGEST SENATOR? Bam Aquino is only 35 as he launches his Senate bid. Photo by Don Regachuela

“Even when I was still a private citizen, I was already telling them, 'Kailangan, 'yang Pantawid Pamilya, tumawid 'yan toward enterprise. Hindi puwedeng manatili 'yan sa pagbibigay lang ng pera. So ngayon, they're already starting to do that, and as a senator, I hope I can support it even further,” Aquino said.

(Even when I was still a private citizen, I was already telling them, “That Pantawid Pamilya program should progress toward enterprise. That cannot remain to be all about doleouts.)

He also emphasized the importance of infusing youth in the Senate. “Iba talaga eh,” he said, quickly pointing out the passage of the Cybercrime Prevention Act of 2012 despite a contentious provision on online libel. Senators have admitted missing out on this provision's implications when they signed the law.

“Kung may kabataan sa senado, I'm sure they would have understood ang implication niyan. That was done on January 24 pa. Ang tagal na niyan nung siningit 'yan, and nobody said anything about it,” Aquino said.

(If there are young people at the Senate, I'm sure they would have understood its implication. That was done on January 24. That provision has long been inserted, and nobody said anything about it.)

The young Aquino is placed in a unique situation. He is running for senator while his cousin is still the chief executive, sparking perceptions of nepotism, special treatment, or conflicts of interest.

This image, however, doesn't bother him. He said being the President's cousin has its “advantages and disadvantages.”

"What I'm hoping for is that in the next 8 months, people will really try to see (what I've done), what do I stand for, what are the things that we are fighting for, and vote for me based on that,” Aquino added. (Watch more in the video below.)

The young Aquino is a social entrepreneur known for Hapinoy, a full-service micro-entrepreneur enhancement program that aims to help and train sari-sari store owners in the Philippines. He also once headed the National Youth Commission.