Why ghosts are still listed as voters 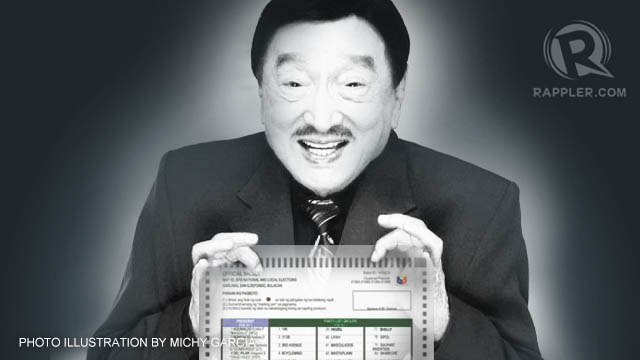 MANILA, Philippines – Efficient online databases, I have to admit, present to journalists like us (or maybe just any snoopy individual) a temptation. We turn them into some sort of toys.

What information will yield? Who will we see? What will we find out? Whether we stumble upon some investigative lead or little details that we bring to the lunch table (we have a slightly different definition of “light” talk, okay?), the thought of having so many information at our fingertips just makes us giddy.

The Commission on Election’s Precinct Finder was no exception.

While poll officers were doing their thing on October 31—dodging unreasonable complaints from deadline beaters, or grouchily dealing with eager but clueless first-time inquirers, or suspiciously accommodating large numbers of registrants from one political camp and unceremoniously closing the offices too early in the day when registrants from the rival camps arrived—I checked the Precinct Finder for dead people. (Why, it was the eve of All Saints’ Day!)

Who to look for? Public figures who we all knew passed away and whom, given their occupation, we assumed to be registered voters.

I found 4 who died this year but with their voters’ registration still listed as active: 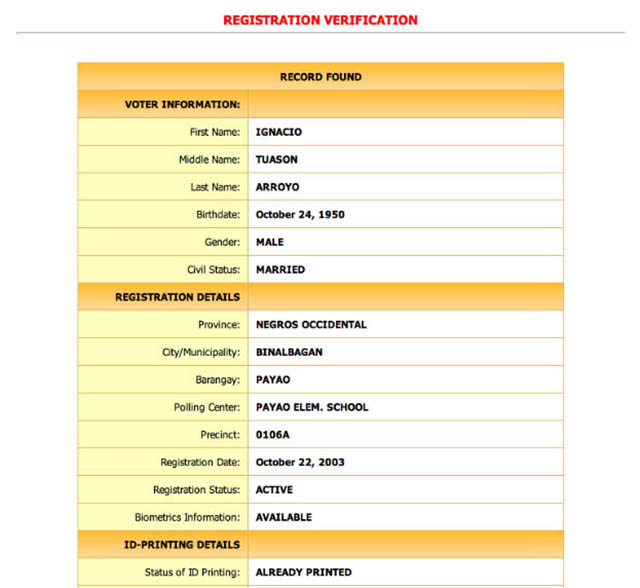 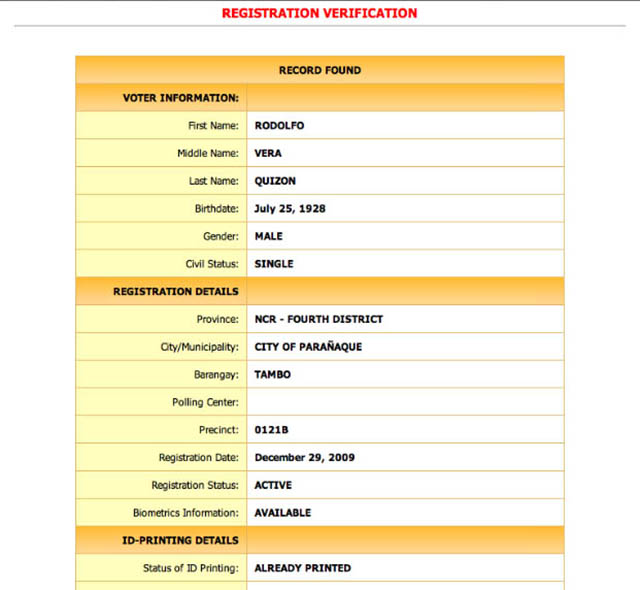 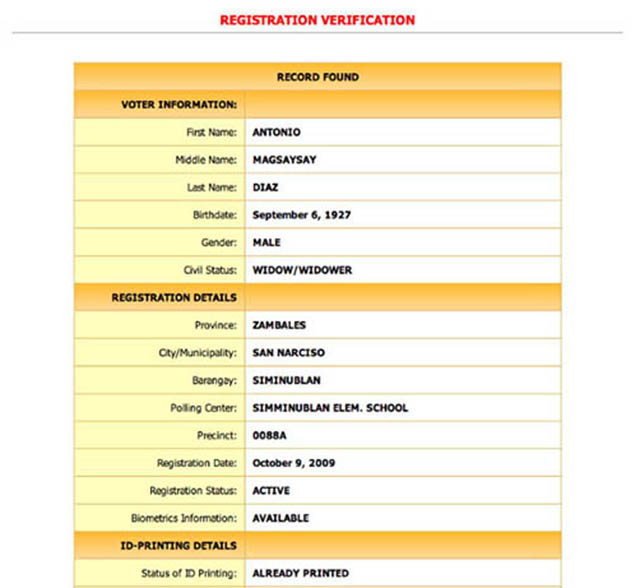 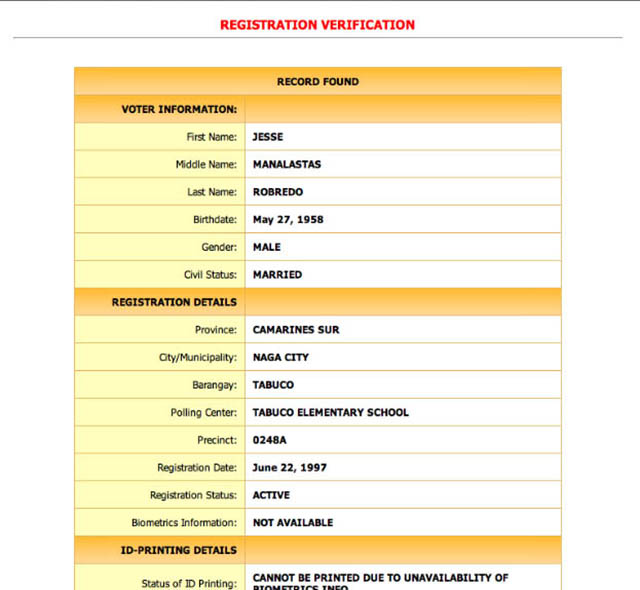 Why is this so? Apparently, some other local government offices and the kin of the deceased might have overlooked—or, worse, didn’t know—their duties to report the deaths to Comelec.

According to Section 18 of Resolution 9149, which the Comelec promulgated on Feb. 11, 2011, local civil registrars are supposed to regularly submit to the local elections officer a list of residents who have died. They have to do it monthly.

When the Election Registration Board (ERB) meets, they will cancel the voters’ registration of those people whose names the civil registrars have submitted.

We can assume the good thing, perhaps, that the ERBs in the localities where those 4 public figures died have yet to convene, so the latter's names have not been removed yet. Or we can assume the bad thing that the local civil registrars have not submitted their names to the Comelec.

Or we can expect some finger-pointing to happen. The Comelec resolution says that if a voter dies in a place other than his residence, the civil registrar of the place of death has to notify the election officer of the locality where the deceased has been a registered voter.

So in Robredo’s case, for example, it’s the civil registrar of Masbate City who’s supposed to advise the election officer of Naga City to remove his name from the voters’ list. Robredo died in a plane crash in Masbate on his way home to Naga.

Or in the case of Arroyo, who died of heart attack in London, who notifies the election of Binalbagan City in Negros Occidental—the Philippine consulate in London? The Comelec is not clear about cases like this one.

The procedure can be confusing, too. On the one hand, it says the election officer will notify the family of the deceased that the latter’s registration has been cancelled. On the other hand, the resolution says, the family or next of kin can submit to the Comelec a sworn declaration of the voter’s death, and the Comelec will accept that as basis for cancelling a registration. So makes the move?

It would be good if parties would see that as making sure on all fronts that the death of a voter is reported to the election office. It would be bad if it will make the local registrar and the family of the dead voter wait endlessly and just assume that the other party is doing the reporting to Comelec.

Wait, the process is not yet through!

Then, the local election officer will furnish the provincial election supervisor and the national Comelec with the list of these cancelled registrations. Only then—if the list reaches the National Central File Division in Intramuros speedily, or if it reaches the central office at all—will the names be taken out of the list.

Without any notice reaching the central office, the poll body, it seems, will be merely relying on its system to detect, and automatically deactivate—not even delist—voters who have not cast a ballot in the last two regular elections.

That was the case with former Social Welfare Secretary Dulce Quintans Saguisag, who died in a car accident on Nov. 8, 2007. The record of former Rene Saguisag’s wife still yields in the Precinct Finder, but there’s a note that says it has been deactivated after the she failed to vote in the last two regular elections—obviously the 2010 presidential election in May and barangay election in October. 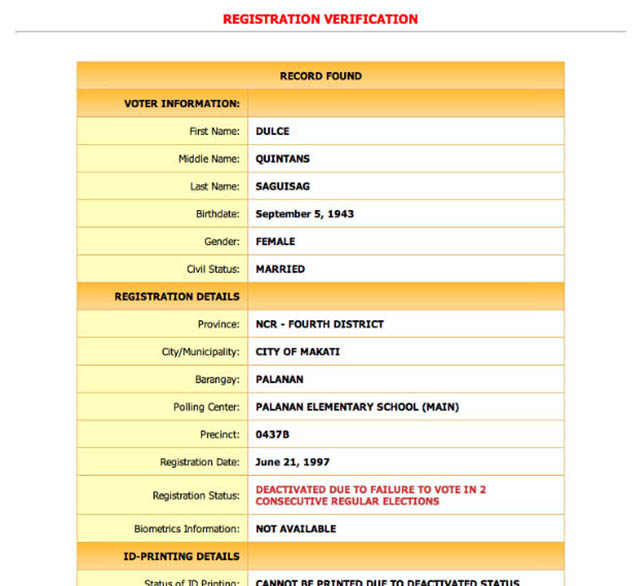 The same thing happened to the mother of former President Joseph Estrada. Maria Marcelo Ejercito died of heart seizure and aneurysm in the stomach on Jan. 13, 2009. The Precinct Finder says her registration has been deactivated for her failure to vote in the last two polls. The record shows she registered in 1997, the year before her son ran—and won—in the presidential election. 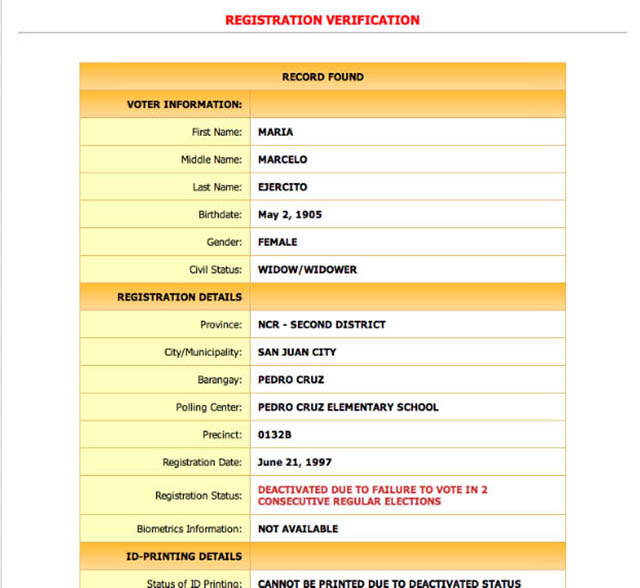 It was amusing to explore stories based on what shows and what doesn’t in the Precinct Finder, really.

There’s no record found for Maria Corazon Cojuangco Aquino, for example. So were the former president’s daughters dutiful enough to submit a sworn declaration to the local Comelec? Or did the civil registrar in Tarlac just knew what to do? 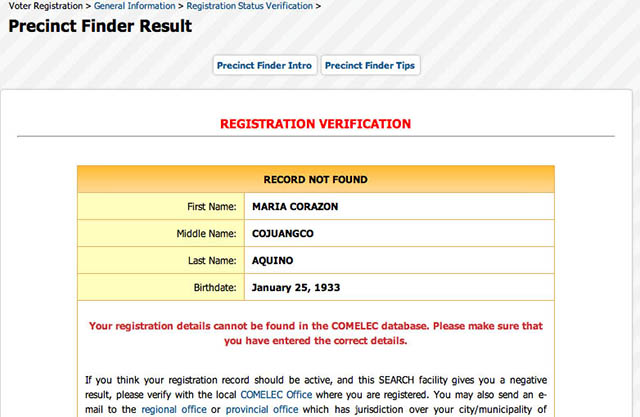 No record either for politicians who died more recently—Quezon Gov Rafael Puchero Nantes (on May 17, 2010) and Sorsogon Rep Salvador Hatoc Escudero III (on Aug. 13, 2012). 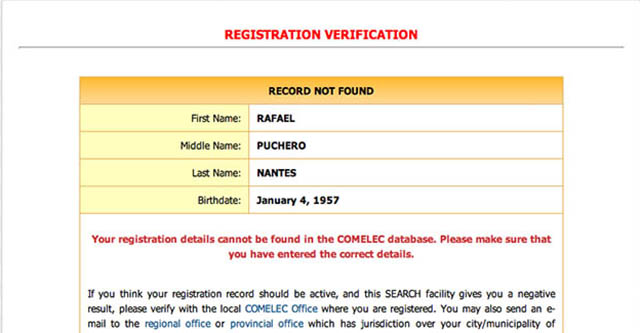 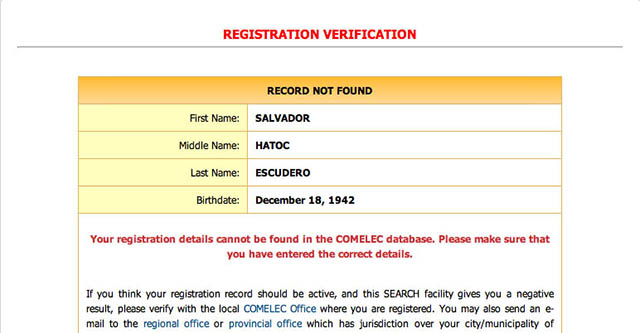 We can go on and on about the famous people. But this is really about us, ordinary mortals, who are vulnerable to having our votes cast on our behalf or stolen from us.

Do you have a relative who died but remains on the voters’ list? Report it to the election office. Don’t rely on the civil registrar. Make it easier for the Comelec. Give the dead the peace we always say we want them to have. They don’t want the ghost of dirty earthly elections haunting them in the afterlife. – Rappler.com