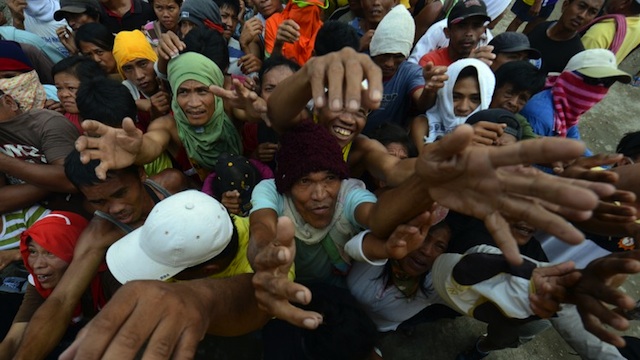 MANILA, Philippines – President Benigno Aquino III compared it to a war zone. In the 6 provinces hardest hit by Typhoon Pablo (Bopha) in early December, 1,067 were killed, 6.2 million persons were affected, and up to P36.95 billion in properties were damaged.

“It will take some time before they go back to normal,” disaster management chief Benito Ramos told Rappler recently.

As of December 18 – or 5 months before the country’s mid-term and local elections – Compostela Valley, Davao Oriental, Misamis Oriental, Siquijor, Surigao del Sur, and Agusan del Sur remained under a state of calamity.

And so he urged the Commission on Elections (Comelec) to consider postponing the polls in these provinces.

Postponing the elections, however, will be a balancing act for the poll body. It will be as much about allowing the communities to focus on their recovery as it is about safeguarding the votes and proclaiming the winning candidates within a reasonable period of time.

Specifically, it will be about the inability of the Comelec to immediately determine the last few senators because the number of votes expected from the 6 provinces will affect who gets into the winning circle.

Election for 12 new senators and for all local officials will be held on May 13, 2013. The incumbents whom they will replace will be in office only until noon of June 30, 2013.

The 6 provinces’ combined voters – 2.13 million as of the last election – may not be ready to vote, though.

Those who lost their shelters are not in the villages where they are listed as voters; they are in 87 evacuation centers. At least 385 public schools, used as polling precincts in the past, have been damaged by Typhoon Pablo.

This is what the Comelec will have to factor in its assessment of whether special elections should be held in these areas.

The number of voters is as big, even bigger, than the margins between senatorial aspirants hovering around the 10th to 14th slots in senatorial surveys.

How will this give election operators a leeway to tilt election results in favor of their candidates through extended campaigning or even cheating?

In close senatorial races – such as those between the last few slots of the Magic 12 and those immediately below it – it will take a few hundred thousand votes to pull one candidate down and push his competitor up.

Then consider the conservative estimate of pollsters that a percentage point in nationwide surveys would be equivalent to 300,000 votes.

The rankings of the 8th to the 11th candidates (with ratings ranging from 43% to 40%) may also change. 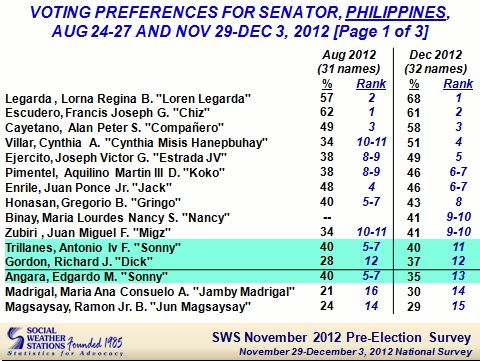 In 2010, a presidential election, the lead of the last winning senator (Teofisto Guingona III) over the 13th candidate (Risa Hontiveros) was 1.17 million.

Not the first time

Postponing elections due to calamity is nothing new. In 2010, the Comelec postponed the October 25, 2010 Sangguniang Kabataan (SK) and barangay elections in 3 Isabela towns – Maconacon, Palanan, and Divilacan – due to the effects of Typhoon Juan (Megi).

In a resolution promulgated on October 21, 2010, the Comelec said that due to the typhoon's effects, “the mandated task” of holding these elections “cannot be accomplished.” The poll body cited the following:

Typhoon Juan killed at least 26, affected 1.66 million persons, and caused up to P8.31 billion in damages to infrastructure and agriculture. This was barely a fraction of the destruction caused by Typhoon Pablo.

It should be noted, however, that Juan ravaged the Philippines from October 16 to 21, 2010, less than a week before the 2010 SK and barangay elections. Pablo struck the country from December 2 to 9 this year, 5 months before the 2013 polls. – Rappler.com