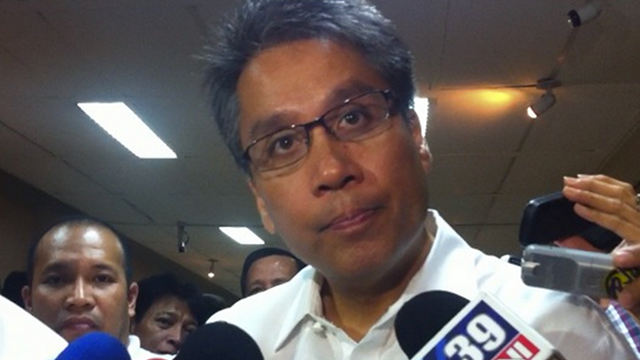 MANILA, Philippines - Any policeman who provides unauthorized security for politicians and exhibits partisan politics in the 2013 midterm elections will be punished.

Interior Secretary Manuel "Mar" Roxas warned Philippine National Police personnel on Monday, January 14, against serving as bodyguards to politicians, and vowed to strictly implement the rules on the provision of security details to candidates.

"I am warning all candidates as well as PNP personnel, especially station commanders, provincial commanders and regional directors, to strictly comply with the regulations that prohibit police from serving as bodyguards to politicians during the election season," he said.

"If we see even a photo of unauthorized PNP personnel near or in the company of candidates, that will be enough evidence to start administrative and criminal proceedings against the offenders,” he added.

This is to insulate the PNP from politics, he said.

Roxas' directive was based on the DILG-PNP Secure and Fair Election (SAFE 2013) plan contained in the PNP Command Memorandum Circular 01-12, which also includes rules on the carrying of firearms by authorized individuals and security personnel.

On Sunday, January 13, the Commission on Elections implemented a gun ban along with the start of the election period, and is the only agency allowed to issue exemptions to candidates who wish to avail of added security from the PNP.

The circular also orders the temporary reassignment of PNP personnel to other units, if they have relatives within the 4th degree in the area they work at.

Any violation of election laws by any PNP member will lead to administrative and criminal action, said Roxas, while heads of police offices and supervisors who disregard guidelines may also face punishment for neglect of duty. - Rappler.com