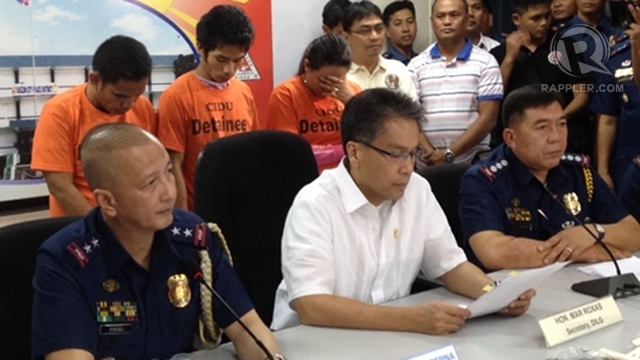 MURDER SUSPECTS. One of the 3 suspects in the murder of Mayor Erlinda Domingo is only 26. Photo by Paterno Esmaquel II

MANILA, Philippines – To prevent poll-related violence, a police checkpoint was 10 minutes away from the place where an Isabela town mayor was killed Tuesday evening, January 22.

The checkpoint failed to prevent the murder of Maconacon Mayor Erlinda Domingo, Interior Secretary Mar Roxas admitted on Wednesday, January 23. Roxas, however, said the checkpoint led to the quick arrest of a suspect in the case.

In a press conference, Quezon City police chief Senior Supt Richard Albano said it took only around 10 minutes for them to arrest Christian Pajenado, a suspect aged 26. He said police arrested Pajenado “in line with those checkpoints.”

(It did escape our attention. Criminals will really conceal their guns, knives, and other weapons. That the suspect was arrested 10 minutes away from the scene, proves that these checkpoints work. It's just as well that they were going to the crime scene and were arrested.)

Domingo was killed at around 8 pm on Tuesday, in front of Park Villa Apartelle, at the corner of Quezon Avenue and Examiner Street in Barangay West Triangle, Quezon City. The area is not secluded and, in fact, is a kilometer away from Metro Manila's main thoroughfare, Edsa, and television giant ABS-CBN.

Espina said for the past 8 days, in fact, the Metro Manila police has seized an average of 5 firearms, deadly weapons, and explosives daily.

Checkpoints have sprouted around the country in line with the Commission on Elections (Comelec) gun ban, which is in place from January 13 to June 12. The ban, which exempts only around 40 groups of offficials, aims to prevent election-related violence.

In a statement, the PNP said it has arrested 3 suspects who, incidentally, come from Barangay Commonwealth in Quezon City.

The first was Pajenado, a native of Samar who lives in Purok Riverside in Commonwealth. He was reportedly armed with a .45 cal pistol with two magazines when the police arrested him.

From the two, the police seized a motorcycle, which could have been used in the crime, and the following weapons – two pistols, .25 and .45 caliber guns, pistol magazines, and ammunition. The police also confiscated dried marijuana leaves and drug paraphernalia.

Is politics a motive for the murder? Roxas said this is speculation for now. He wants a thorough probe.

An ally of Isabela Gov Faustino Dy III, Domingo was running for re-election under the Nationalist People's Coalition. She was allied with the Dys and Albanos of Isabela.

She was vice mayor to Francisco Talosig until 2009, when the former mayor was ambushed in Tuguegarao. Domingo assumed the remainder of Talosig's term.

Police then said the possible motive for Talosig's killing was his crusade against anti-illegal logging and illegal fishing.

Roxas said investigators should explore the link between the two killings. – Rappler.com