Why revert to old airtime cap for pol ads? 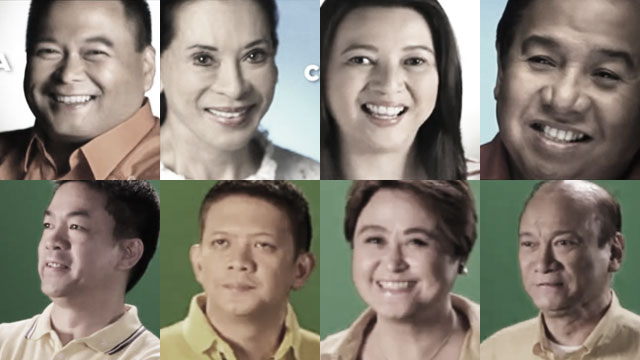 POLITICAL ADS. These faces of opposition (top) and administration (bottom) candidates are in political advertisements, which are now under new rules

MANILA, Philippines – When the Commission on Elections (Comelec) en banc was discussing the implementing rules and guidelines of the Fair Elections Act for the 2013 midterm polls, they sought to revisit the limits on airing campaign propaganda.

The 7-man poll body had seen the folly of liberally interpreting the section on the airtime for political advertisements.

When Republic Act 9006 was first implemented in 2001, the Comelec allowed each national candidate a maximum aggregate of 120 minutes of TV ads and 180 minutes of radio ads.

In 2004, however, Comelec chair Benjamin Abalos re-interpreted the law and allowed each candidate 120 minutes per TV station and 180 minutes per radio station. This was observed until the 2010 presidential elections.

Instead of promoting fair elections, however, the old rule skewed the political landscape in favor of the moneyed, frustrating the original intent of the law.

So this year, the Comelec under chair Sixto Brillantes Jr has adopted the original airtime limits. It was a unanimous decision.

Commissioner Rene Sarmiento says that during the en banc discussion on Resolution 9615, the rules on campaign propaganda, “the dominant spirit was to level the playing field” among the candidates, especially those aspiring for national positions.

Commissioner Armando Velasco said: “I thought it was logical to reinterpret it as intended by the law, so I voted with the majority.”

The Kapisanan ng mga Brodkaster ng Pilipinas and GMA Network filed a motion for Comelec to reconsider its move. The KBP also threatened to bring the its case to the Supreme Court, if necessary.

Enacted in 2001, the law lifted the ban on political ads, installing the media as a fair venue for election campaign. Media groups strongly lobbied for the passage of the measure, with an eye on the potential revenues from political ads.

For lawmakers, the media’s potential revenues were not the overriding principle. At that time, the political landscape was getting to be dominated by showbiz personalities, political veterans, and members of political dynasties, who had the inherent advantage of name recall and popularity.

While Congress set the time limit in the law, it left a grey area on how it should be interpreted. The Comelec, headed by former Court of Appeals Justice Alfredo Benipayo, believed that the airtime cap—120 minutes on TV and 180 minutes on radio—was for the candidates and not for every broadcast station.

No one protested how Comelec interpreted the law.

In 2002, after failing to get confirmed by the Commission on Appointments, Benipayo was replaced by former Mandaluyong mayor Benjamin Abalos. The politician that he was, Abalos compromised on a number of things, including the rules on campaign propaganda.

Former Comelec law department head Ferdinand Rafanan recalls that when he was preparing the Fair Elections Act’s implementing rules and regulations for the 2004 polls, a Palace official who had strong ties with a media organization bullied him into re-defining the airtime limits.

“You mean to say you are going against the wishes of the Chairman? He has already approved the changes,” Rafanan recalled the Malacañang official as saying.

“He bullied me and I had no choice. He was a Palace official and he was name-dropping the chairman,” he added.

The new interpretation of the airtime limits pushed election spending to stratospheric heights. Reaping the windfall, as expected, were the media outfits, particularly TV and radio.

In the book Selling Candidates: Political Ads in the 2007 Senatorial Elections, it was established that political ads were responsible for the 20% increase in the income of TV stations in the first half of 2007, a midterm election year, compared to the same period in 2006, a non-election year.

In 2010 when the presidential and local polls were conducted, the top two TV giants—ABS-CBN and GMA 7—reported record incomes. ABS-CBN said it earned P420 million from political ads in the first quarter of that year. GMA 7 said it reaped more than P2 billion in political ads during the course of the 2010 national polls.

It is no surprise now that the broadcast industry is collectively howling over the decision of the Comelec to limit the airtime for campaign ads this year. Network honchos are denying that their complaint is about their potential loss of income. They say the public stands to lose in terms of getting to know candidates well if airtime for political ads are limited.

Sarmiento disagrees, saying that the per-station rule only benefited those who have the resources to buy as much airtime as they could and further disadvantaged those who have much less campaign funds.

Instead of the achieving the intent of the law to inform voters about the qualifications of candidates, the Abalos rule instead gave voters a barrage of propaganda, Rafanan observes. “It defeated the purpose of the Fair Elections Act.”

He added, “The Comelec gave the candidates more than what they actually needed to promote themselves. ”

The result was excessive campaign spending that was harder to monitor. “In the 2001 elections, monitoring the airtime exposure was easier since they were limited to the 120-minute cap for national candidates.”

Aside from limiting airtime for political ads, the Comelec has another means to level the playing field for all candidates, provided in the law but hardly noticed by most politicians.

It’s called the Comelec time—the “free air time” that the poll body can require “from at least 3 national television networks and 3 national radio networks” and which can be used by candidates for national office to “announce their candidacies.”

The Fair Elections Act says: “Said television and radio networks shall provide to Comelec all airtime including prime time, that is adequate to enable all candidates for national positions to announce their candidacies and programs of government for such number of minutes and at specific time slots as may be determined by the Director IV of the Education and Information Department.”

The law also allows Comelec to procure advertising space in 3 national newspapers to be distributed equally among all national candidates.

As far as he can recall, Rafanan says, no national candidate or even Comelec has availed of the Comelec’s free airtime. “How come they are not availing of this free time? This could save the candidates tons of money.” – Rappler.com