How gov't secures 'heart' of polls 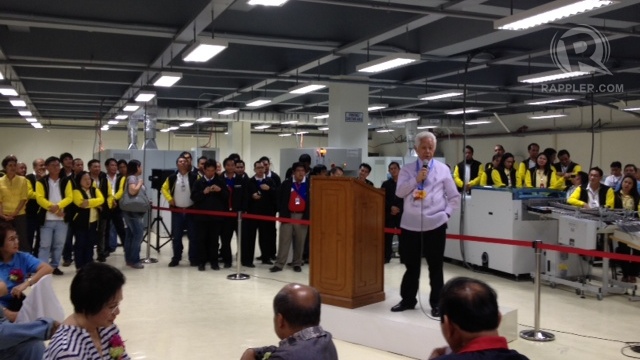 MANILA, Philippines – If there's one facility voters should watch in the next 3 months, it is the new 5,000-square meter basement of the National Printing Office (NPO) along Edsa, Quezon City.

Brillantes calls ballots the “heart” of elections, and the most crucial place, when it comes to this, is the NPO's new P30-M basement that was inaugurated Wednesday morning. Delayed by over a week, the NPO will start printing ballots on Monday, February 4.

At stake is ballot-printing for over 52-M voters on May 13.

“Without ballots, there will be no elections.... This is the commencement of our electoral processes. Therefore, NPO will be the starting line,” Brillantes said in his speech at the ribbon-cutting. (Watch a ballot-printing demo below.)

A 73-year-old election lawyer, Brillantes knew how important the NPO is – not only for the Comelec but for election operators. He said election lawyers, himself included, frequented the NPO at crunch time.

“Binabantayan namin ang printing. Dito nag-uumpisa ang lutuan. Dito nagluluto ng balota eh. Makakabili ka ng extra,” he explained in an interview. (We used to monitor printing. This was where manipulation began. This was the place to manipulate ballots. One could buy extra.)

A rampant practice under manual elections, the overprinting of ballots helped election operators in padding votes.

But “not in the case of the automated system,” Brillantes explained. “They cannot manipulate here, unless we have a security breach, which will never happen. We have very tight security.”

No prominent case of ballot overprinting surfaced in 2010, the first time the Philippines held automated elections.

One voter, one ballot

A major security feature, said NPO assistant director Raul Nagrampa, is to print on a one voter, one ballot basis. This means the NPO will not print over 52,014,648 ballots, if the agency will base it on Comelec's voter registration figures dated January 22.

He said this scheme was also implemented in 2010. 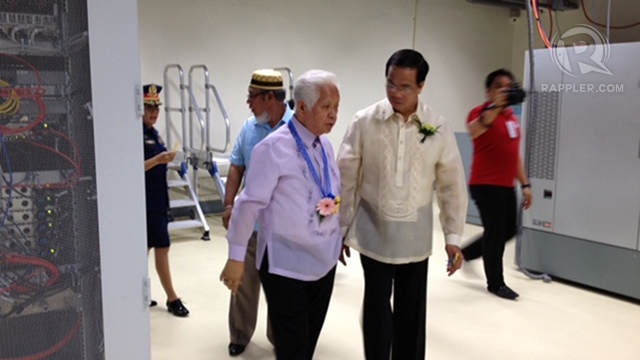 Unlike in the manual system, the new system of printing is “safer” because it uses digital technology, Nagrampa added. He likened the automated system to printing using Microsoft Word, when one can program how many copies would be printed.

"Dati hindi eh, 'yung mechanical lang lahat. There may be danger na may ma-overprint or may masira during printing,” he explained. (Before, everything was mechanical. There was the danger of overprinting or other malfunctions during printing.)

He added that the Comelec has a system to dispose of spoiled ballots.

Nagrampa explained that every ballot will be tested in a Precinct Count Optical Scan (PCOS) machine. Hired on a casual basis, Comelec employees will insert each of these in the PCOS, to check if the machines can process the ballots.

A ballot will be deemed spoiled if the PCOS rejects it 3 times. A committee composed of Comelec and NPO representatives will determine if a ballot is spoiled.

“All those that will not be read by the PCOS will be destroyed, and replaced,” Nagrampa said.

He said other “safety nets,” which involve factors like paper characteristics, will protect the ballots from tampering.

NPO's ballot-printing went under fire in November 2012, with a congressman even wanting to investigate it. A Youtube video showed PCOS machines rejecting 4 out of 10 sample ballots. (Watch more in the video below.)

In an interview with Rappler, NPO director Emmanuel Andaya said that was an initial test. He said the NPO then didn't receive the PCOS specifications, prompting them to experiment on various ballot sizes.

“Holy Family prepared 10 ballots of different sizes. Naturally the bigger ones did not enter the PCOS machine, and were rejected,” Andaya said.

The NPO, however, conducted a final testing, with the Comelec requiring them to process 10,000 ballots. The machines read 99.95% of these ballots, Andaya explained.

“All our activities from the start have been transparent and above-board. So we have gone through so much and we complied with all the instructions of the Comelec,” he said.

The NPO's deadline for ballot-printing is April 25 – and they now have less time, after a 9-day delay. From 90 days that were supposed to begin last January 25, the NPO now only has 81 days.

Nagrampa, however, said the NPO is confident “we will be able to beat the 81 days.”

Ballot-printing largely depends on over 500 people assigned to do this.

From NPO's side, Nagrampa said 42 people will man the 3 machines, taking on 9-hour shifts. He said the Comelec will likely assign around 500 employees to check ballots through 156 PCOS machines.

Their moves will secure – or imperil – the elections for 52-M Filipinos. – Rappler.com