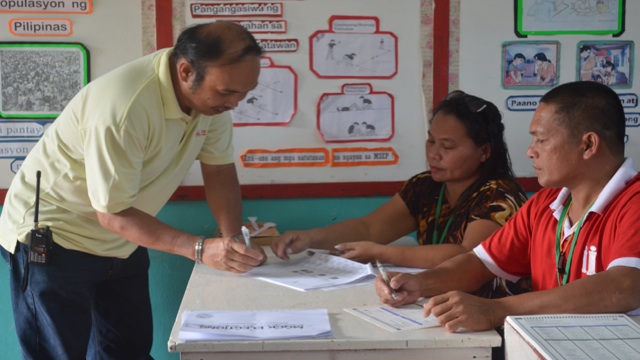 DUMAGUETE CITY, Philippines – Hours of delay in transmitting votes to a single server occurred in one of the two precincts where the mock polls in Dumaguete City was held Saturday, February 2.

For over two hours, the PCOS machine would display an error message that read, “Transmission Failed.” Votes were finally sent after 74 retries.

The Board of Election Inspectors (BEIs) at the Camanjac Elementary School had to attempt multiple location shifts of the PCOS machine to counter the bad signal, first near the windows then at the hallway.

According to Roland Ortuoste, clerk for elections in the Barangay Affairs Department, the glitch was caused by the traffic in the structural system. The influx of data caused the KBP server to bog down.

While the transmission of votes to the Kapisanan ng mga Brodkaster ng Pilipinas (KBP) citizen party’s server might have caused an almost 3-hour delay, voters were happy with the speed with which they were able to cast their votes.

Jessie Jobelem, who voted in the mock polls, said that if he had to choose between the old system and the new, he'd rather choose the new one he had just participated in since “it's more high-tech and faster.” The average time a voter was able to cast his/her vote was 5 minutes.

Ironically, precinct 0127 A, where the delay occurred, finished earlier at 2 pm than its neighboring precinct which finished at 3:14 pm.

What accounts for the one-hour difference, apart from a similarly weak signal, is the power interruption that occurred in the City Central Elementary School.

At around 3 pm in precinct 0001A of the City Central Elementary School, the power went out right before the transmission process was completed.

Election Commissioner Grace Padaca, who was at Cagayan De Oro (CDO) for monitoring of mock polls in the area, mentioned that a similar brownout in CDO proved the usefulness of the PCOS batteries.

Minor glitches were also observed such as machine paper jams due to the thermal paper's thickness, compromise of secrecy because of the limited space in the precinct, and the entry of some kids in the voting area. A BEI chairman was also a few minutes late.

At the City Central Elementary School, the expected 50 voters showed up and not a single ballot was rejected by the machine. This was despite the purposeful inclusion of minor erroneous marks such as a scribble or two on the blank space of some of the ballots.

On the other hand, only 45 of the 48 voters who were present at the Camanjac Elementary School were able to successfully cast their ballots. The other 3 voters whose votes were not counted included two latecomers and another one whose ballot was rejected.

An elderly woman who participated in the mock polls claimed that she had difficulty in understanding the instructions and in reading the candidates’ names in the ballots because of her poor eyesight.

The mock polls, she added, taught her the correct procedure she will be following during the May mid-term elections when she will cast actual votes for the candidates of her choice.

Jose Marie Acebo, 34, claimed that he was happy about the mock elections because of the quickness and smoothness of the process though he was not a first time voter. Like Acebedo, Filipina Aranas is confident about the system and encourages others to simply follow the rules set by the election commission.

“The new system, the PCOS machine, is easy and makes the voting faster. It’s faster and more reliable as long as you listen and read the instructions,” said Aranas in fluent Visayan. – With reports from Therene Quijano, Raymond Vincent Cutillar, Alyza Burdeos, Kimberly Limpahan, and Lurlyn Mae Carmona/Rappler.com