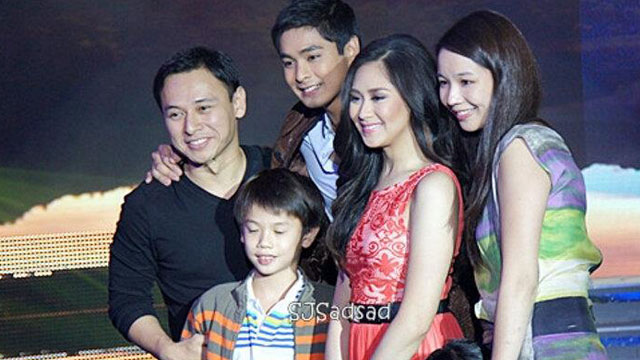 CAVITE, Philippines - When Team PNoy bet and Aurora Rep Sonny Angara aired a video of Coco Martin endorsing him, the voters at the Municipal Hall in Carmona shrieked excitedly, louder than for any other senatorial bet present.

Angara is one of the bets who has celebrity-endorsers. Along with Martin, Angara is seen in television commercials with popular celebrity Sarah Geronimo.

But he told reporters on the sidelines of a Team PNoy rally here, both actors had provided their services for free.

"They were pro bono… In exchange, I promised to promote their advocacies," Angara said.

He added that he is unlikely to be represented by celebrities on stage because it is hard to fit in their schedule, explaining it had taken him two or 3 months to find a date to shoot the commercial. Although he said he would welcome it if possible, as fellow senatorial bet Grace Poe has.

Poe was represented in Carmona by actor Bobby Andrews.

Presidential cousin Bam Aquino also said he is being helped by actor Ding Dong Dantes voluntarily. While Dantes has not been in any ads or commercials with him, Aquino said the celebrity is one of the heads of his volunteer group.

The two worked together in the National Youth Commission.

Bam Aquino said he has yet to see if he will feature in advertisements with actors. It will all depend on what research shows.

"Anyway, I really have nothing to pay them," he said.

Former Akbayan Rep Risa Hontiveros agreed, saying she didn't have the money to pay a celebrity to endorse her.

While she has no actor appearing with her in ads, she said she knows there are celebrities who believe in her platform. She said she is open to partnering with actors to help her campaign.

"Showbiz endorsements cannot hurt," she said. "If a showbiz personality offers to help me, then why not? I'll be working on that and keep my ears on the ground," she said about finding help.

But at least one senatorial bet is adamant about not using a celebrity to help her campaign -- former Sen Jamby Madrigal.

Madrigal famously used popular actress Judy Ann Santos in her 2004 senatorial campaign, which analysts attributed to her win. The two have since had a falling out, after Madrigal said she regretted using Santos' help, which offended the actress.

She said this time around, she will rely on Team PNoy commercials instead.

The senatorial hopeful also brushed off reports that Madrigal still owes Santos P15-M from the campaign, saying the issue is over. - Rappler.com