#PHvote quotes: Who was wittier? 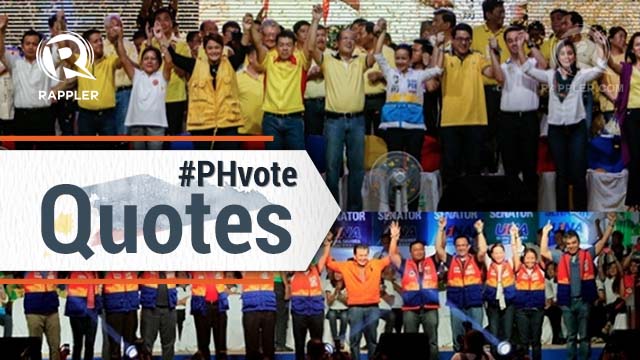 Photo of Team PNoy by John Javellana, Photo of UNA by Charlie Saceda

MANILA, Philippines – What do you get when you combine the campaign period and Valentine’s Day? Not-so-sweet nothings.

Sound and fury marked the start of the campaign period for national candidates. The campaign opened on the same week as hearts’ day, highlighting the love-hate relationship between the two coalitions, the president and romance (or the lack of it), and even a journalist and a congressional staffer.

It’s a tug-of-war not just for common candidates but also for the voters’ heart.

Here are Rappler’s #PHvote quotes of the week:

“The fact remains that she is seriously unqualified to be in the Senate …. Nancy Binay is running on a ‘Gaganda ang buhay’ theme, taking off from her father’s successful campaign slogan. That’s easy for her to say: Life becomes beautiful, is made easier, if you’re someone’s daughter.” 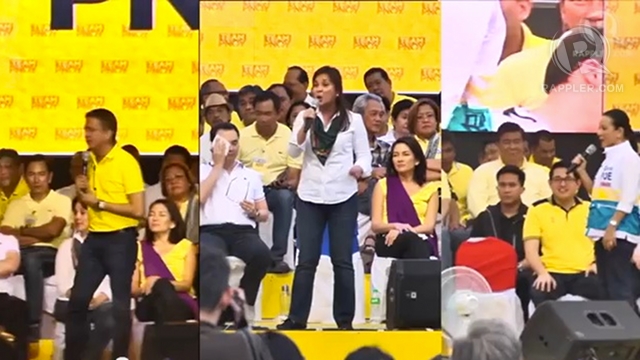 NO SHOWS. The tug-of-war for common candidates Sen Francis Escudero, Sen Loren Legarda and Grace Poe intensifies after UNA threatens to drop them for snubbing its Cebu proclamation.

(It’s like courtship. If you both ask the girl out for a date but she goes out with the other guy, what can you do if she doesn’t like you?)

- United Nationalist Alliance (UNA) campaign manager Toby Tiangco in a Rappler interview on the common candidates. UNA has threatened to drop them from the slate for snubbing its Cebu rally.

- Comelec Spokesperson James Jimenez on the eve of the campaign period. Now that the campaign has begun, he said the poll body will go after publicity-hungry politicians violating election rules.

Tiya Pusit, bobbing her microphone on his head: Sa kabila ‘yun! (They belong to the other side.)

- Comedian Tiya Pusit playing a name recall game before the start of the UNA proclamation rally in Plaza Independencia, Cebu. She is a friend of UNA’s Cebu congressional candidate, talent manager Annabelle Rama. Tiya Pusit also made politicians and supporters dance to the hit 'Pusong Bato.' 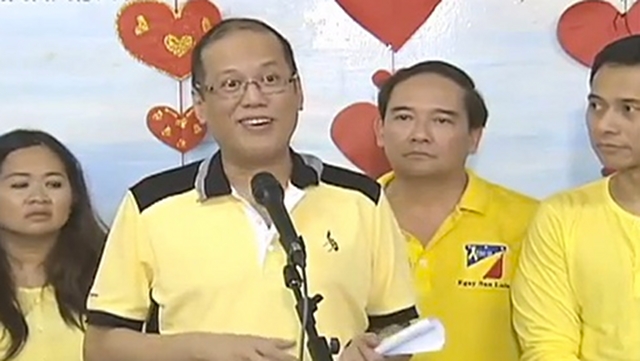 FINDING LOVE. President Aquino said he will try to find someone to talk to over the Internet on Valentine's Day. Screengrab from RTVM

(I will look for someone to chat with tonight so Joshua won’t get tired of the two of us always talking. Maybe we can try through the Internet.) 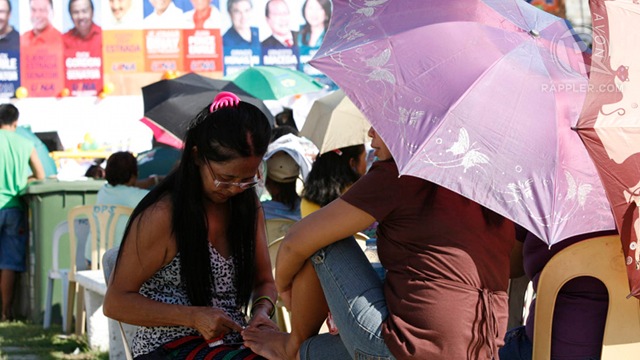 DO YOU FEEL IT? Cebuano voters wait for the start of the UNA rally in Cebu. Later that day, Cagayan Rep Jack Enrile tells them they cannot eat the GDP the administration is boasting about. Photo by Charlie Saceda

“We will not get to daang maganda (beautiful path) if we don't first go through daang matuwid (straight path)." 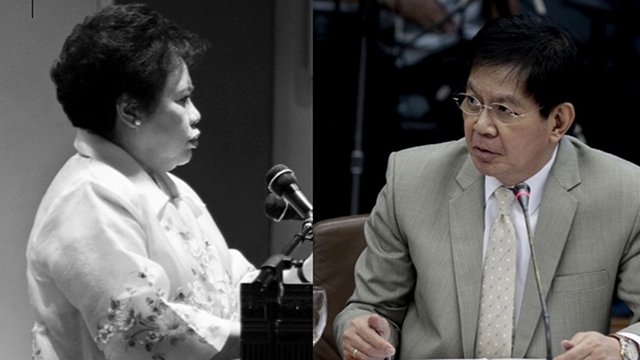 Gay senators? Why not?

“There were some not exactly masculine senators way, way in the past. It's the same. They served well, that's all that matters. It's a non-issue. Just be yourself… and try not to scandalize anybody.”

“That is the problem mam. U assume these things are legit when u don’t read more on it outside of your teleprompters. :( …. You have to hit at bitches to keep them in check.”

- Vince Borneo, legislative staff of Bayan Muna Rep Teddy Casiño, in tweets to and about journalist Ces Drilon. Borneo hit Drilon for retweeting questions about Casiño’s alleged links to communists. He has since apologized. – Compiled by Ayee Macaraig/Rappler.com