Are there cracks in Team PNoy? 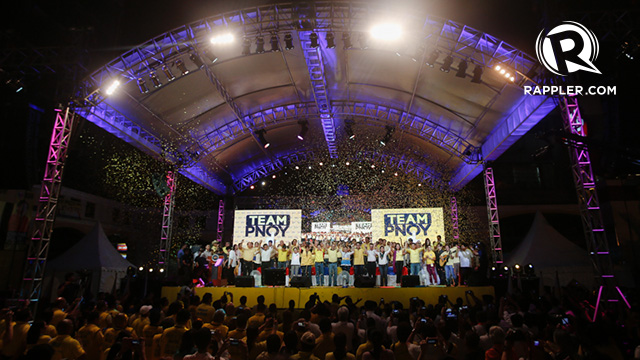 MANILA, Philippines - The Nationalist People's Coalition (NPC) admitted on Tuesday, February 19, it has "issues" with the Liberal Party in local contests but stressed it is not leaving the LP-led Team Pnoy senatorial coalition.

NPC spokesperson and Valenzuela City first district Rep Rexlon Gatchalian told Rappler it is not breaking its partnership agreement with the LP. The NPC has partnered with the LP, along with the Nacionalista Party (NP), Laban ng Demokratikong Pilipino and Akbayan, to create a rainbow coalition now known as Team PNoy.

When asked about reported cracks in the coalition, Gatchalian admitted there are "operational details that are still being ironed out" at the local level. "Rest assured come the local campaign period, these issues will be resolved," he said.

"[These are just] operational issues that will harmonize our two parties' campaign efforts at the local level. This is important so that we can maximize the exposure and reach of our partnership...The party is steadfast in working towards the electoral success of the coalition candidates. The NPC will continue to support the President and his reform agenda until his last day in office," he said in a text message.

NPC member and Sen Loren Legarda, the top ranking senatorial bet in surveys, is the sole NPC member on the slate. She is also a guest candidate of the opposition, the United Nationalist Alliance (UNA). Another NPC member, Cagayan 1st district Rep Jack Enrile, is running with UNA.

Initial reports said the NPC had an informal meeting on Monday night, February 18, wherein it revoked its partnership with LP.

But Gatchalian said he was unaware of such a meeting, explaining it was unlikely.

"Our Chairman Gov. Dy is currently preoccupied with the funeral arrangements of his late brother Mayor Ben Dy of Cauayan, so I doubt if the NPC leadership met and discussed politics," he said.

Team PNoy spokesperson Miro Quimbo also brushed off the "issues" as "expected" and "not surprising."

"Any coalition will not be free of it. They will always have issues especially on the local side, with individuals who have been at each other's throats and unfortunately they belong to different parties that have coalesced with other parties. Those things will happen," he said.

He said ideally, such issues could be sorted out by an arbitration committee but in cases where that is not possible, declaring certain provinces as free zones would be best.

He gave assurances however, that it would not affect the coalition at the national level.

NPC, the political party founded by businessman Eduardo "Danding" Cojuangco for his failed 1992 presidential bid, is not known for a particular advocacy. It has, through 4 administrations, built itself as reliable partner of the political party in power, finding strength in its numbers.

Its informal partnership with LP means the NPC will tap its political machinery to support the entire administration ticket and commit to support the remaining years of the Aquino administration. For NPC, the LP agrees not to field candidates in some of its bailiwicks and instead support NPC candidates -- an arrangement that LP's other senatorial race partner, the NP, failed to do. - Rappler.com