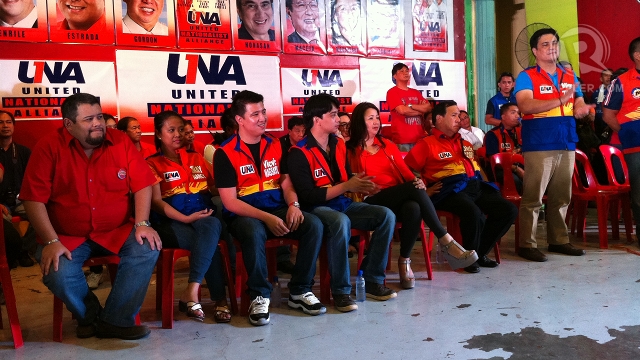 OLONGAPO CITY, Philippines – Awkward or not at all?

It was a rare sight that piqued the interest of many Olongapo residents -- seated together on one stage were the opposing politicians of the city and province.

The UNA rally forced the Gordons and the Magsaysays to come together even if they are contesting the same positions in the local level.

Yet on Thursday night, the Magsaysay boys climbed the UNA stage with their mother. The Magsaysays are UNA’s official candidates. Even Brian Gordon, an independent candidate, was present.

Mayor James Gordon, though, was not seen on stage. He is running under UNA’s rival, the ruling Liberal Party.

Still, UNA hosts and senatorial candidates took pains to thank Mayor Gordon and his wife, Anne, for allowing the alliance to hold the rally in the city. Anne Gordon is running to replace her husband as mayor. She is running against her husband's nephew, James “Bugsy” delos Reyes.

When it was her turn to speak, Rep Magsaysay also greeted Brian as “the son of our Sen Dick Gordon.”

Gordon in turn asked the voters to ensure that two candidates from Zambales will be elected to the Senate.

An Olongapo mayor for 11 years, Gordon was also founding chairman and administrator of the Subic Bay Metropolitan Authority. Magsaysay is a 3-term congresswoman in the 1st district of Zambales.

UNA pushed through with the arrangement to allow Brian Gordon on stage but not Mayor Gordon supposedly upon the request of the Magsaysays. 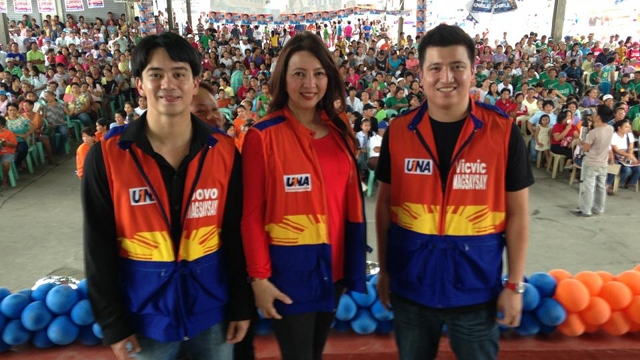 MOTHER AND SONS. UNA is fielding Rep Mitos Magsaysay's sons as candidates in Zambales. Jobo (left) is running to replace her as Zambales representative while Vic-Vic (right) is running for vice mayor of Olongapo. Both are competing against relatives of UNA senatorial bet former Sen Richard Gordon. Photo from Vic-Vic Magsaysay's Facebook page

The Gordons and the Magsaysays are long-time rivals in Zambales. This led critics to question the inclusion of members of both clans in the same senatorial slate.

The local dynamics in Zambales triggered criticism that the Gordon-Magsaysay alliance in the national level smacked of “strange bedfellow” politics.

“Actually, it’s not awkward,” Magsaysay told Rappler after the rally.

“If you notice, I was the first one pa to introduce his (Gordon's) son on stage knowing his son is the opponent of my son here. It just goes to show that as far as politics for the Magsaysays are concerned, we are not insecure as for what we can do for our city and for our district. So for me, may the best candidate win.”

“Ang maganda sa UNA, we’re politically mature so sa amin, ang goal namin is to serve and we can always bury whatever issues we have in the past. It has no relation anymore to what we want to do in the country in the Senate. Marami naman kaming advocacy that we can share together.” (We have many advocies we can share together.)

“No, it’s not awkward. We’re independent-minded. They can do whatever they can.”

“Strange bedfellows? No. UNA has a lot of friends. That’s what it says,” said Gordon. 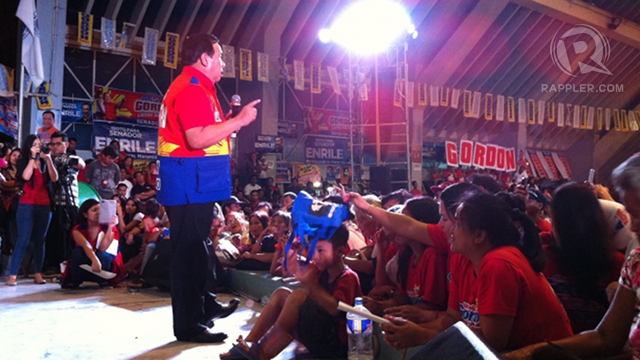 'ON HIS OWN.' Former Sen Dick Gordon tells Olongapo residents that his son, Brian, will have to campaign on his own, and he will not force them to vote for him.

Rep Magsaysay and former Sen Gordon though said they will not meddle with their children’s rivalry.

Magsaysay said, “We’re both professionals. When elections come, I’ve always engaged in high-level campaigning in my district and I know my sons will also do high-level campaigning – platforms and advocacies – and it’s up to the people to decide who will be the next vice mayor or congressman in the district.”

In his speech at the rally, Gordon said he and his wife, Kate, will vote for their son but Brian will have to court voters by himself.

“Brian is on his own. He has to run by himself. I did that. He can do that,” Gordon told Rappler.

Gordon added, “There are no permanent friends, no permanent enemies [in politics], just the permanent common good for our country.” – Rappler.com