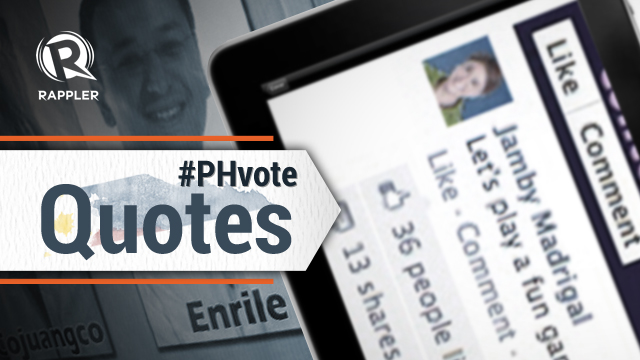 MANILA, Philippines – It’s Week 2 of the national campaign period, and election players are getting more intense – but not always with good results.

A mayor was suspected of orchestrating the arrest of his vice mayor for – hold your breath – “illegal” bingo operations. A senatorial candidate offered to give away iPads, but dropped the online promo and pointed to her volunteers when the Commission on Elections (Comelec) warned it could lead to her disqualification.

And then there was that wrong photo appearing on a senatorial candidate’s tarpaulin at a campaign rally, the opposition’s junking of 3 candidates, and the Twitter word war between the poll chief and a news organization.

Here are Rappler’s choice quotes from the campaign trail the past week: 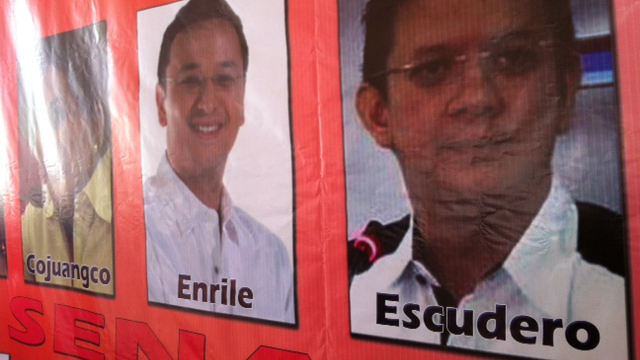 PICTURE TROUBLE. Quimbo's photo was spotted under the name "Enrile" in the poster that featured UNA's top leaders and Senate bets. Photo by Ayee Macaraig.

@ayeemacaraig Now that may explain the slide in his ratings. They've been using my pic. Mas pogi naman si Rep Jackie d hamak.

– Liberal Party spokesperson and Marikina Rep Miro Quimbo, reacting to a tweeted photo of a poster featuring his picture under the name “Enrile”

Don't put words in my mouth or make-up stories for the sake of saleable news. This— @gmanews gmanetwork.com/news/story/295…

I always speak w/in the context of the question thrown on me & it should be kept in that context once presented to the public.

I always speak w/in the context of the question thrown on me & it should be kept in that context once presented to the public.

@chairbrillantes No intention to put words in your mouth, sir. This was your exact, recorded quote: "Maski hindi mag-report... (1/2)

@gmanews "Comelec will be 'relaxed' on campaign expenses reports" is YOUR conclusion not mine so don't attribute it to me.

@gmanews u asked "mappkulong"? Said no, under RA7166 penalty is only fine, not imprisonment; but doesnt mean implementation will be relaxed.

"Like any lover that you have, if you love somebody, dapat magpakita ka rin para tuloy-tuloy ang pagmamahal. Pero pag na-snub ang mahal sa buhay, talagang magagalit din iyon (You should show up so the love would remain, but if you snub your loved one, of course she would get mad) and that’s what happened." 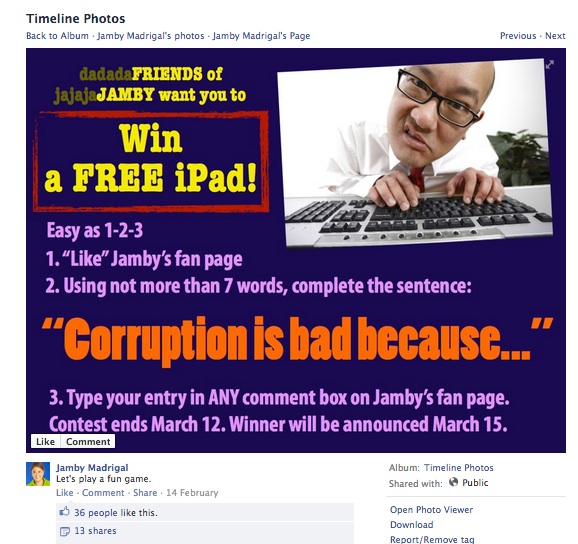 Speak your mind out about corruption and win an iPad facebook.com/photo.php?fbid…

"We will seek justice. We will not allow tyranny to prevail in Manila. We will fight corner by corner, street by street, barangay by barangay in Manila."

– Manila’s re-electionist Vice Mayor Isko Moreno, threatening Manila Mayor Alfredo Lim with a lawsuit after he was arrested by the pólice over alleged illegal bingo operations

“’Pag napatunayan mong utos ko ang pag-aresto sa iyo, magre-resign ako. ‘Pag hindi, ikaw ang mag-resign.” (If you can prove I ordered your arrest, I will resign. If not, then you resign.)

– Lim, challenging Moreno to prove his claims that Lim was behind his arrest 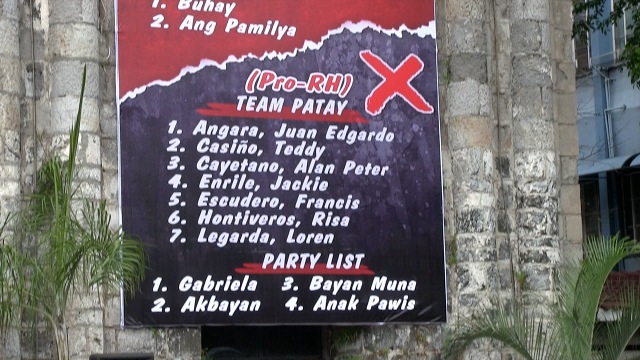 “The gravity of these questions [on the RH law] allows for no political maneuvering. They strike at the heart of the human person and the family and such act is non-negotiable…We call on the faithful not to support any candidate who is anti-life, and to support those who are pro-life.”

– The Diocese of Bacolod, as it announced the names of senatorial candidates that Catholics should not vote for after they supported the reproductive health law