Candidates to Church: No name-calling 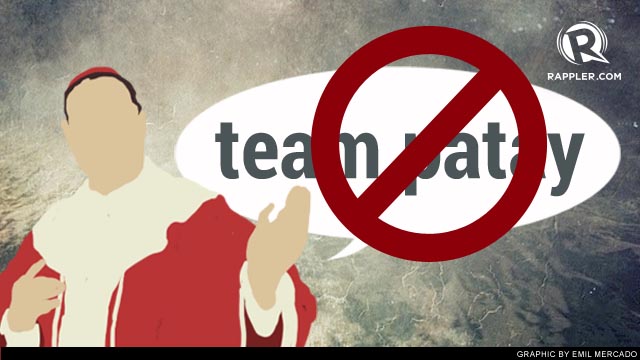 MANILA, Philippines – Senatorial candidates tagged by the Church as “Team Patay” or anti-life are asking leaders from the Diocese of Bacolod to desist from name-calling.

This was in reaction to earlier appeals by the diocese to voters in Negros to junk 5 of Team PNoy administration candidates for support of the RH bill which eventually was signed into law by President Benigno Aquino III. The 5 are senators Francis ‘Chiz’ Escudero, Loren Legarda, Alan Peter Cayetano, Aurora Rep Sonny Angara, and former Akbayan party-list Rep Risa Hontiveros.

This marked the first time that a diocese came up with a list of candidates that Catholics should repudiate in an election.

The Diocese of Bacolod, according to Church reporter Aries Rufo, also "broke a tradition that the Philippine Catholic Church has held even in the most politically challenging times of the nation’s history."

For his part, Angara said in a statement, “It’s not proper for them to call us ‘Team Patay’. We fought for the said law because we wanted to improve the quality of lives of the Filipinos.”

Hontiveros said the resort to name-calling is “disappointing” because “the Church should respect the decision of the people and I think they should first give the newly-implemented law a chance.”

She added the strong position taken by the Diocese of Bacolod is a violation of the rule on the separation of Church and State.

On Friday, February 22, Team PNoy campaigned in Negros Occidental which has 1.57 million voters. Candidates vowed to counter the Church's campaign against those who supported the RH law.

‘RH bill does not kill’

Enrile, who also voted for the RH bill despite opposition of his father, Senate President Juan Ponce Enrile, said it is not the law, but hunger that kills.

“There are 20 million Filipinos who are hungry every day. There is a looming world food crisis and in times of crisis, women and children are the most vulnerable. The reproductive health bill empowers women to decide what is best for herself and her family. It makes them and their children less vulnerable,” Enrile said.

Sen Loren Legarda told the Church there is nothing in the RH law that will allow abortion.

“The RH law is against abortion. Bilang isang ina, bilang babae at bilang Pilipinang senador, minarapat ko na bumoto para sa ating mga mahihirap na kababaihan sa kanayunan. I fully respect their position. I am a devout Catholic. I have high respect for the Catholic Church.” Legarda said. (As a mother, woman, and Philippine senator, I considered it best to vote for the benefit of poor women in the rural areas.)

Leaders of the influential Catholic Church earlier threatened to mobilize the so-called “Catholic vote” against candidates voting for the RH bill when it was still pending in the House of Representatives and the Senate.

The Diocese of Bacolod endorsed the candidacies of “Team Buhay,” the senatorial aspirants who are against the RH law.

Part of the list are former Las Piñas City Representative Cynthia Villar, and Senators Aquilino “Koko” Pimentel and Antonio Trillanes IV. The 3 are part of the Team PNoy ticket.