1986 Comelec walkout not about Cory or Marcos 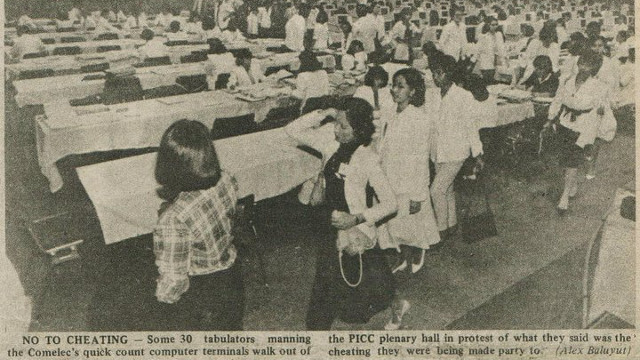 WALKOUT. Comelec employees walked out during the quick count of votes in the 1986 snap elections. Photo from http://definitelyfilipino.com

MANILA, Philippines – The walkout of vote tabulators during the 1986 snap presidential election triggered the People Power Revolution that the Philippines commemmorated on Monday, February 25.

Somehow blurred in Edsa Revolution accounts in the past 27 years, however, was this detail: These election workers never said they got orders to cheat opposition candidate Corazon Aquino.

Neither were they opposition supporters who were out to sabotage the canvassing to make President Ferdinand Marcos look bad.

In fact, they were aware that various camps were trying to use them to advance their respective agenda during those politically charged days before the revolt that ousted Marcos.

These were recounted on Monday by the Commission on Elections Employees Union, through national president Mac Ramirez, in a press released sent to media organizations.

It was February 9, 1986, two days after the snap elections. These individuals were manning the quick count at the plenary hall of Philippine International Convention Center. They narrated they noticed their superiors started to manipulate the results in favor of Marcos.

Enraged, the group left their posts, headed to the Baclaran Church, and afterwards gave this statement:

We are computer technicians who were hired for the 1986 Comelec National Tabulation Poject. We walked out of the project on February 9, 1986 for a basic professional reason: we did not want ourselves to be used in any way that violates fundamental professional ethics.

We were made to believe from the start that the job was going to be a professional one. The honor, responsibility and challenge that we saw in the project were enough to vindicate the hard work and long nights spent developing the computerized system before it was to start operating on February 7, 1986.

We emphasize that it was a spontaneous act of protest; we have no leader, we are not syndicated, nor do we wish to be linked to any partisan motives. None of us has any political affiliation. We are just independent-minded persons whose only desire is to preserve the purity of our profession.

When the discrepancy between the computer tabulation reports and the figures on the tally board was detected, the immediate reaction was one of indignation and utter frustration. It hurt us to see a deliberate betrayal of trust. It did not matter who was winning or losing; cheating whether by 1 or 100,000 is still cheating. It was an insult to our most basic sensibilities, both moral and professional. And we did not want to have anything to do with it.

The walkout was an escape from an intolerable situation. We just wanted to leave the place and go to some place where we can “drink our blues away”! But as we left the Plenary Hall, we were mobbed by people whom we didn’t know, and we didn’t have a choice but let ourselves be led to Baclaran Church in the confusion that followed. Shocked and scared, we were helpless.

To think that all we wanted to do was be true to ourselves and to the job that we do best, under threat of losing what was otherwise a respectable job at the National Computer Center.

This is our story for everyone to know. We also wish to deny the allegations that:

1. We were ordered to cheat Cory;

2. We visited the NAMFREL Headquarters;

3. We are hardcore oppositionists out to sabotage the system as part of Autumn Leaves, Capricorn, or whatever;

4. We were dismissed for incompetence at 10:00 that evening;

5. We were reacting to the heckling of the crowd at the Plenary Hall Gallery;

6. We have “admitted” we were wrong and are now regretting what we have done; and any other fantasies that anyone wants to ascribe to us.

After giving out this statement, the group was kept for safety in various places: Camp Aguinaldo, Loyola House of Studies in Ateneo, and a retreat house. They were only able to go home on February 20, two days before crowds started gathering on Edsa for what would become the People Power Revolution.

One of the them, Achie Concepcion-Jimenez, said this an interview years after the walkout: “During those 12 days in February 1986, we went from being computer programmers/tabulators to heroes to saboteurs to ‘marvelous.’ They say we could have been killed during those days, but we had so many people thinking of us, praying for us, loving us. And we found strength in each other — not as heroes, but as friends.”