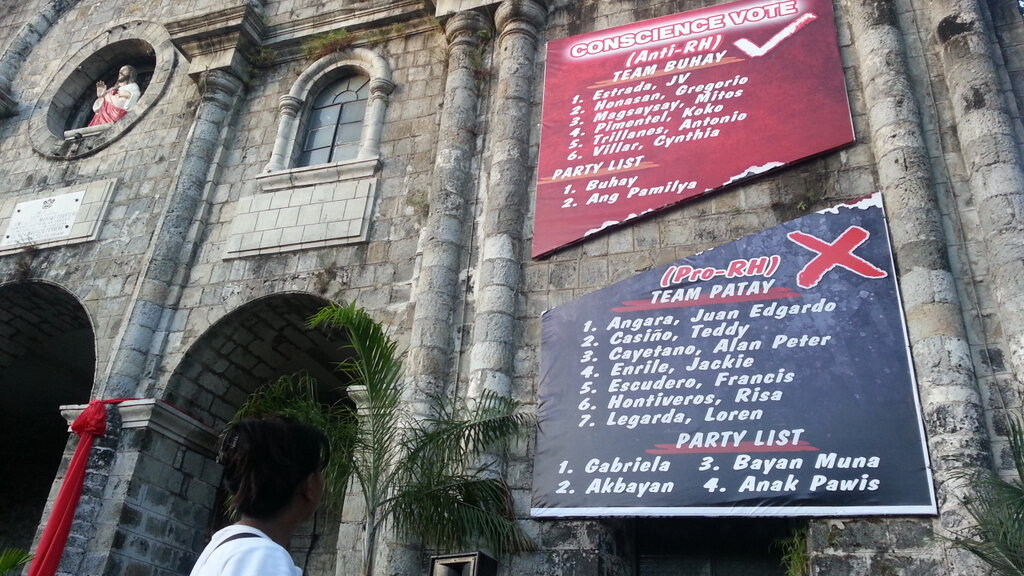 Although "saddened by the defiance" of the Diocese of Bacolod to take down posters posted in front of the San Sebastian Cathedral, Commission on Elections (Comelec) Chairman Sixto Brillantes Jr -- through Twitter -- said the Comelec maintains that the diocese committed an election offense. The Comelec will file election offense cases against the local diocese next week, Brillantes said.

I maintain that election laws including those governing campaign apply to all citizens regardless of faith or persuasion, even the Church.

We will commence the proceedings next week for the filing of election offense cases to whoever is behind this, unless restrained by SC.

Brillantes' statement comes a day after the Diocese of Bacolod filed a petition before the Supreme Court for injunction and temporary restraining order against the order of the Commission on Elections (Comelec) to take down its controversial "Team Buhay/Team Patay" posters.

We maintain, however, that the Team Buhay/Patay tarpaulin is an "election propaganda" & thus covered by d size restriction imposed by law.

COMELEC welcomes the suit filed by the Diocese of Bacolod in the Supreme Court questioning our order/notice to remove its illegal tarp.

Brillantes said they "quietly met and pleaded" with the diocese to remove the posters and sent them two notices but the diocese still refused to comply with their orders.

Comelec Resolution 9615 states that posters must not exceed the prescribed 2 feet by 3 feet size. However, streamers up to 3 feet by 8 feet in size may be displayed on candidates' headquarters or sites that will be the venue for a public meeting or rally, and such posters may be displayed only 5 days before the date of the event and must be removed within 24 hours after.

Three days after Comelec notified the diocese, the Bacolod Cathedral cut the posters in half -- down to the prescribed size of 2 feet by 3 feet from their reported original size of 6 feet by 10 feet.

Brillantes, however, said that their original size of the poster was "estimated" to be 10 feet by 20 feet, contrary to earlier reports.

Emil Marañon, head executive assistant of the poll chief, told Rappler that they were "barred from measuring" the material, but it was definitely more than the 6 feet by 10 feet originally reported.

So even if it was cut by half, each part was still oversized.

@rapplerdotcom @miriamgracego orig size was estimated to be 10x20ft contrary to earlier reports, so even if cut in half still around 5x10ft.

Marañon said they got reports that the church "re-attached the 10 feet by 20 feet tarp yesterday (March 1) after they filed the SC case."

Lastly, I want you to judge. Tell me if this is not oversized? If this is not meant to influence voters? twitter.com/ChairBrillante…

Brillantes has been actively using Twitter as a tool to collect information and notify concerned parties about election offenses. - with a report from Angela Casauay/Rappler.com