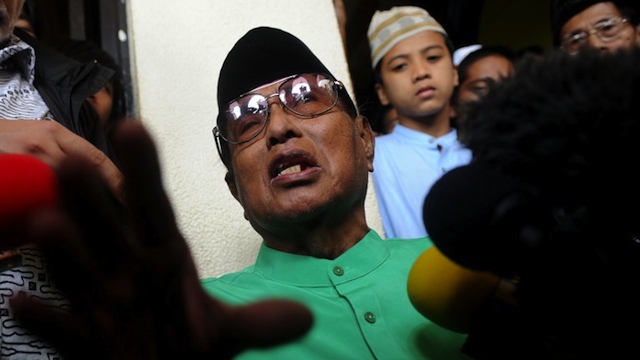 MANILA, Philippines – If the Sultan of Sulu who has been in the news lately because of the Sabah standoff looks familiar, it's because he went around the country as a senatorial candidate in the mid-term elections before this.

Jamalul Kiram III, now 74, was on President Gloria Macapagal Arroyo's Team Unity slate in 2007. In the coalition's lineup, he was the only candidate from the Partido Demokratiko Sosyalista ng Pilipinas or PDSP, the party of then presidential adviser on national security Norberto Gonzales.

We were reminded of his failed Senate bid by an opinion piece by journalist Ellen Tordesillas, who cited Kiram's close ties with Gonzales.

Kiram's brother has led an army to assert the sultanate's claim on Sabah, which is also being claimed by Malaysia. Violence erupted on Friday, March 1, in Lahad Datu, where 12 Filipinos and 2 Malaysian uniformed men died.

In 2007, Kiram finished 26th among 37 candidates. He garnered 2.49 millions votes, or 8.4% of the votes cast for all senators. He followed closely celebrity Richard Gomez, who was 25th with 2.73 million votes.

A check of 2007 figures from the Commission on Elections shows that the gentleman from Sulu almost topped the senatorial race in his home region of the Autonomous Region in Muslim Mindanao, except that then re-electionist senator Edgardo Angara beat him by more than 800 votes. Kiram got 546,670 votes, while Angara got 547,507.

Before his senatorial bid, Kiram was a member of the Legislative and Executive Advisory Council (LEDAC) on the Sabah Claim and was Arroyo's Presidential Adviser on Muslim Royalties Concern.