Despite Sabah, Aquino to continue sorties 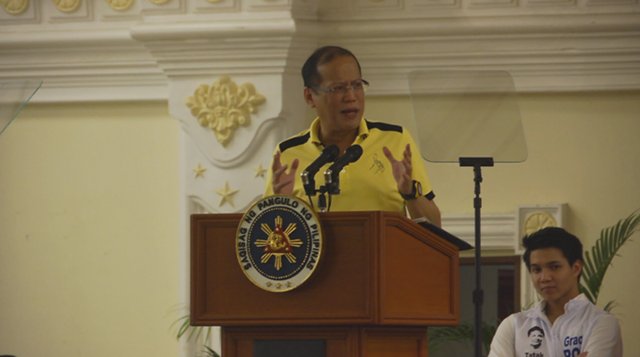 This, despite criticisms of his decision to "campaign" in San Fernando, Pampanga on the day fighting broke out in Sabah, resulting in the death of 12 Filipinos.

Campaign manager Franklin Drilon defended Aquino's decision to attend the sortie in Pampanga where he pushed for the candidacy of his coalition's bets, arguing Aquino was also there for other engagements and projects relating to the province's development.

He also said Aquino will keep following his schedule, including sorties.

"As he continues to govern, he is on top of this concern. He has a schedule to be followed, but the welfare of 800,000 Filipinos in Sabah will be of primordial interest," he said in a press conference on Monday, March 4.

Aquino's next scheduled appearance on the campaign trail is on Wednesday, March 6 in Davao City.

Drilon also took offense to comments that Aquino should not have appeared on stage in San Fernando just hours after the assault in Sabah.

"The perception is he was campaigning. I have personal knowledge (that's not the case). If you noticed… he had to leave the stage and go to the back room and continue to monitor the situation. It's clear that the welfare of the 800,000 was his concern," he told reporters.

On Friday, March 1 Team PNoy went on a 4-district tour of the province and was joined by Aquino in San Fernando.

Aquino arrived and waved to the crowd, before excusing himself and leaving the stage until it was time for his speech. He delivered one of his longest speeches on the campaign trail so far -- almost an hour.

He started his speech by saying he has yet to get the complete details on Sabah and that they were working on fixing the situation, but no longer addressed the issue afterwards. He also refused to grant media interviews on the subject.

Two days later on Sunday, March 3, a total of 12 people died in a fresh clash in Sabah as fears mounted that violence linked to the Filipino intruders had spread to other areas.

Communications Secretary Ricky Carandang also conceded the standoff could not be considered over because there were still Malaysian forces and the followers of Kiram in the area. Kiram's supporters have refused to leave.

"He's not just looking at this as an election," Quimbo said. "It is a fundamental step to continue his reforms." He said part of it is to make sure the "peace process in Mindanao will surely be supported by the majority" and said "that is the context on how and why he is undertaking these activities."

The coalition also appealed to both allies and non-allies alike, and asked that the issue not be politicized.

Drilon said "statements like 'Losing PH' is what LP (Liberal Party) stands for" only muddles the issue and is an example of a "reckless statement" that jeopardizes the safety and security of Filipinos in Sabah.

On Saturday, March 2, opposition candidate Sen Richard Gordon took a swipe at the administration during a rally in Bukidnon and made the statement. Gordon joined the rest of his coalition, United Nationalist Alliance, whose bets have criticized Aquino and his handling of the Sabah issue. - Rappler.com