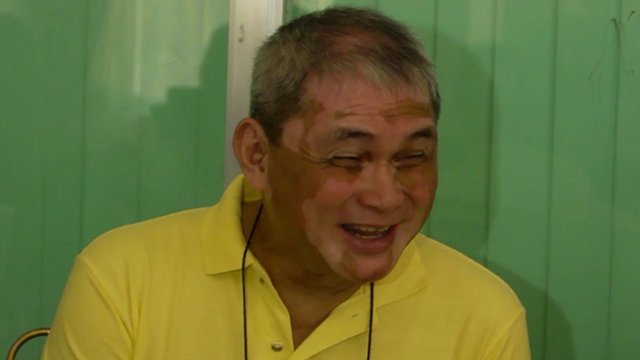 CHALLENGE ACCEPTED. Liberal Party candidate Ed Panlilio is running against incumbent Gov Lilia Pineda for the gubernatorial post in Pampanga, a race he acknowledges will be difficult. Photo by Franz Lopez.

PAMPANGA, Philippines - The national candidates of President Benigno Aquino III may have nothing to worry about in Pampanga, but the local race here is a different story.

Drilon expressed confidence that Panlilio would emerge victorious, saying Pampanga has overwhelmingly supported Aquino in the past, specifically in the 2010 presidential race. He said he is "confident this will translate to support for Gov Panlilio."

But Panlilio himself is not as sure. He said he was grateful for the "deep" support of the President which he said he could feel, but expressed some reservations about his chances. "National candidates are strong here in Pampanga. We are just concerned about the local candidates," he said.

Panlilio is running with lawyer Ma Amalia Tiglao-Cayanan as his vice governor, and will be challenging incumbent Gov Lilia Pineda and her running mate and son, Dennis Pineda.

The Pinedas are running under Kambilan, a kapampangan word for "shield," which the elder Pineda founded. They are allied with former President Gloria Macapagal-Arroyo who also hails from the province.

Even former president Joseph Estrada, a stalwart of the opposition United Nationalist Alliance or UNA, stood no chance in Pampanga, mustering a measly 43,298 votes.

Panlilio said they are banking on Team PNoy candidates and Aquino's popularity to help lift them in the polls.

Pampanga, which has 1.2-M voters, is traditionally known as jueteng country.

Drilon said they would push for the victory of their candidates precisely because of this -- it would send an important message of change and reform. "We like the challenge here in Pampanga. We will work for victory for Among Ed, because this will send a strong signal to the entire country that in Pampanga, which is dominated by traditional politics and jueteng politics, we espouse the straight and narrow path. We can prevail. That is why we are fighting strongly for Among Ed because we know it will be a symbol of tuwid na daan in our politics," he said.

Pineda's husband, Rodolfo "Bong" Pineda, has been investigated by Congress for his alleged involvement in the illegal number game not just in the province but in several areas in Luzon. He has denied the claims.

But Cayanan said the money earned from illegal gambling has fueled the campaign of the Pinedas and Kambilan candidates, which puts them at a disadvantage.

"According to our data, jueteng has a 30-M peso income per day. It greatly affected the politics here in Pampanga because we only have 10 mayors out of 21 (cities and municipalities) but the other party, they have mayors, sometimes two candidates. So how can they support two candidates in one municipality if jueteng money is not involved?"

She added however that while they have minimal resources -- and cannot afford handing out kilos of chicken during noche buena like their opponents do -- she said their "strategy is better" and is confident of their campaign.

Panlilio admitted competing against the wealthy and well-entrenched Pinedas would be a challenge. He noted however that while Mrs Arroyo still has influence in the province, it was diminishing, adding they're more concerned about jueteng's influence in the local races.

"There might be a slight influence of Arroyo but I think it is more of the jueteng politics (that is a concern)… It is a belief in many people that unless you're supported by the jueteng lords that it is very difficult to win. We would like to work hard to reverse that opinion," he said.

He added that while Pineda ran in 2010 under Arroyo's coalition Lakas-Kampi-CMD, Pineda has since re-launched Kambilan, in an attempt to "veer away from Lakas" and the Arroyo link.

Panlilio, a former priest, was suspended of his priestly duties in 2007 when he won as governor over re-electionist Gov Mark Lapid and Baby Pineda despite running as an independent without any political experience. His platform during the campaign was the eradication of jueteng.

In 2010, he was ousted from office due to supposed errors in canvassing, and was replaced by Pineda who was declared winner. Panlilio ran again in 2010, but lost to Pineda.

Panlilio has found himself in the middle of some controversies. He has been the subject of a perjury case with the Commission on Elections for under-declaring his expenditures and was accused of concealing over a million pesos in political funds. In 2008, the Pampanga Mayors League also criticized him for alleged poor performance. - Rappler.com