Pimentel, Zubiri slam each other anew 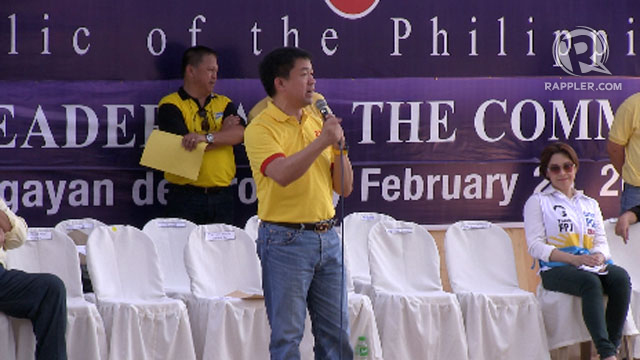 The word war between Sen Koko Pimentel and resigned Sen Miguel Zubiri escalated yet again on Tuesday, March 5 when the former challenged his political rival to avoid making false promises.

Pimentel, a Team PNoy bet, could not hide his irritation when asked to react to Zubiri's recent comments about him, including one that challenged Pimentel to talk about his platforms.

Without mentioning Pimentel’s name, the former Bukidnon representative talked about a senator from Mindanao who he said has done nothing but criticize him on the campaign trail.

Pimentel lashed out at Zubiri, who is running under the opposition United National Alliance (UNA). He suggested Zubiri was making false promises to people on the campaign trail.

(I actually find the things Migz Zubiri says funny because he's the one who keeps on trying to catch my attention when he isn't even on my radar anymore. What I want to say is instead of calling my attention he should explain to the people not just of Mindanao, of Bukidnon but to the entire country, his plans to provide free health care for all).

(Because you know if he is lying about that, making false promises during a campaign is a form of cheating. So let us not be swayed by overpromising politicians. That is what he must respond to instead of calling my attention, so we could play cute to each other).

Pimentel also took offense to a statement Zubiri made to a crowd in Cagayan de Oro, wherein he slammed Pimentel for skipping Bukidnon, Zubiri's home turf. Zubiri said "perhaps he does not love the people of Bukidnon."

In response, the Cagayan de Oro city native said he actually had projects in every municipality there, and even spent 60-70% of his Priority Development Assistance Fund to assist the area after typhoon Pablo.

The animosity between Pimentel and Zubiri is rooted in the 2007 polls. Pimentel claims Zubiri cheated him of 4 years in the Senate after he was initially proclaimed the 12th senator.

Pimentel filed an election protest against Zubiri, contesting votes in provinces including Maguindanao, where some opposition candidates then got zero votes. Zubiri was a candidate of the Arroyo administration’s Team Unity.

In 2011, Zubiri resigned amid a series of exposes of election cheating in 2007. His resignation came just days before the Senate Electoral Tribunal proclaimed Pimentel the rightful winner of the polls.

Their word war started this time around when Pimentel sang a version of John Lennon's "Imagine," lamenting his being victim to electoral cheating. Zubiri responded to Pimentel also in song.

Zubiri has often presented himself in past sorties of his coalition as a candidate who has not attacked anyone but whose name has been repeatedly destroyed.

In a statement, he responded to Pimentel's declarations.

"I am not playing cute. Obviously, you do not really represent Mindanao, because you do not go home to Mindanao. Now, if you do your research in my home province Bukidnon, we were awarded by the Department of Health (DOH), the World Health Organization (WHO) and other organizations for best practices in socialized medicare especially for indigent patients," the statement read.

Zubiri also challenged Pimentel and brought up the harsh memory of the 2007 polls.

"Now, my question to you Mr. Pimentel is: What have you done in Cagayan de Oro? Maybe none and maybe that’s the reason why I beat you there, in your hometown. The people of CDO appreciate the programs that I have done. And, if you are a truly representative of Mindanao, you should spend more time in Mindanao," it said.

He wrapped up his statement with sarcasm.

"If Makati City was able to provide socialized medicare to its constituents and we were able to do it in Bukidnon we can also do it for the whole country. Now, who is playing cute here."

Pimentel was born in Cagayan de Oro, while Zubiri was born in Makati but raised in Bukidnon. - Rappler.com