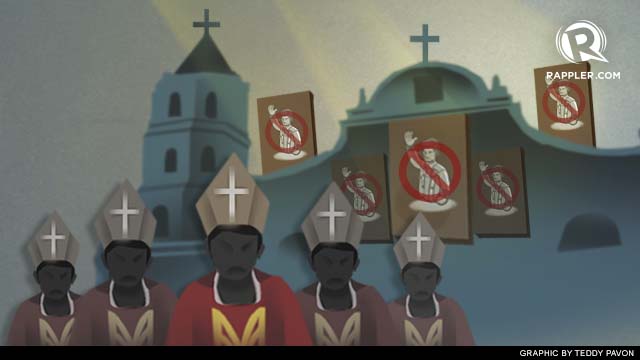 MANILA, Philippines – Five bishops in different provinces will be hanging “Team Patay” posters too, following the lead of the Bacolod prelate in campaigning against senatorial candidates who supported the RH law.

The bishops revealed their plan to Rappler even before the Supreme Court temporarily stopped the Commission on Elections (Comelec) from taking down the said anti-RH posters outside the Bacolod cathedral.

The 5 who have decided to follow the lead of Bacolod Bishop Vicente Navarra are:

Conversely, they will support the senatorial candidates who have rejected the RH law, dubbed as Team Buhay.

There are 85 ecclesiastical territories in the country, each led by a bishop.

This developed as former Senator Aquilino “Nene” Pimentel Jr, whose senator son is running for re-election defended the Bacolod diocese for putting up the Team Buhay and Team Patay tarpaulins.

He argued that the materials should not be covered by election laws. “The Comelec is wrong. That is part of the religious expression of the diocese.”

“The Bacolod Buhay-Patay tarps are expression of Church position on the RH bill, not election propaganda. Therefore, not subject to Comelec regulation,” Pimentel said.

Comelec rules, however, say that any material that campaigns for or against a candidate will be classified as propaganda and should thus follow the sizes and posting sites prescribed by the poll body.

The Comelec had threatened to take down the Team Patay and Team Buhay posters in Bacolod, but the diocese got the Supreme Court to issue a temporary restraining order (TRO) on the Comelec.

Arguelles told Rappler that he and the 4 prelates came up with the decision during the installation of Famadico as new bishop of San Pablo diocese.

“We concur with the move of the diocese of Bacolod. We will be initiating our own campaign against the Team Patay,” he said.

The prelate, one of the most vocal critics of the RH law, said he is meeting with Catholic lay groups and organizations in Batangas to map out their strategy.

A day before the TRO was issued, Arguelles sent out text messages urging “the Catholic voters of the [Lipa] archdiocese and elsewhere, as well as men and women of goodwill, to reject those who legislate against life, against decency and Christian morality, against the commandment of God and against the laws of the Church.”

The candidates, in their capacity as senators and congressmen, were able to vote on the RH bill last December.

Among the party-lists groups, getting the thumbs down are Akbayan, Gabriela, Bayan Muna, and Anakpawis.

Getting the Church’s nod are party-list groups Buhay and Ang Pamilya.

This is the first time that certain bishops are marshalling the resources of their dioceses for the election or rejection of senatorial and party-list candidates.

However, the first time that bishops tried overt campaigning was during the 2010 polls, where some prelates went openly for Kapatiran Party candidate JC delos Reyes. Delos Reyes is now seeking a seat in the Senate.

This anti-RH campaign could finally put to test the Catholic vote as an election game changer – not only in the local but also in the national level. The Catholic Church vigorously campaigned against the passage of the RH law, arguing it would only lead to the increase in abortion cases. – Rappler.com