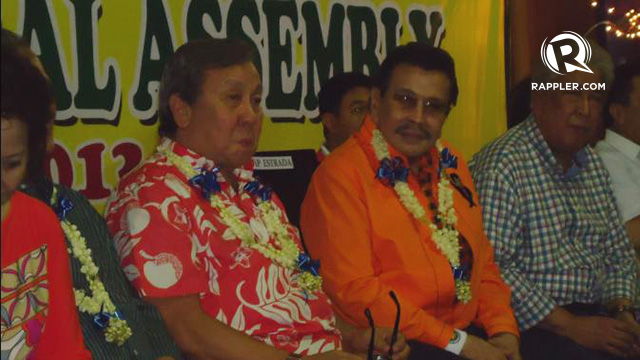 Estrada was inducted as honorary chairman of the Kabalikat ng Bayan sa Kaunlaran (Kabaka), an organization founded by Bagatsing. The congressman and his son, Councilor Don Juan “DJ” Bagatsing, bolted the LP to seek re-election under UNA.

Unlike previous public appearances, Estrada did not verbally attack Lim after Wednesday's intense debate at the University of the Philippines-Manila. Estrada neither presented concrete plans for the city. “Alam n'yo naman na ang mga programa ko (You already know what my programs are),” he said.

Former Manila Mayor Lito Atienza also graced the event and showed support for Estrada's bid for mayoral post. He told Rappler he was dismayed how Lim has been running the city.

“The Pandacan Oil Depot was supposed to be relocated during may term, but they passed an ordinace [preventing it],” Atienza said. He also added that crime was not as rampant in the University Belt when he was still the mayor of the city.

Atienza told Rappler in an earlier interview that he originally wanted to run for mayor again, but gave way to Estrada so as not to split the opposition vote against Lim.

Lim and Estrada are facing off for the second time in the political arena. In the 1998 Presidential Elections, Estrada bested Lim, who placed fifth in the polls. – Rappler.com