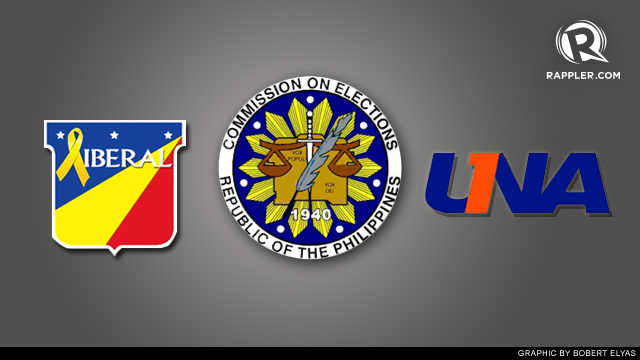 MANILA, Philippines - The Commission on Elections (Comelec) has named the Liberal Party (LP) and the United Nationalist Alliance (UNA) as the dominant majority and minority parties, respectively, in this year's midterm elections.

In a decision released on Tuesday, March 19, the poll body said these political parties are accredited as dominant parties after they proved to have the following:

In terms of the number of candidates, LP leads the tally with 13,370 candidates. The Nacionalista Party came second with 3,681 candidates, and UNA followed is third with 3,358 candidates.

However, NP didn't apply for dominant status, and only asked to be accredited as one of the 10 major political parties.

Lakas-Kampi also applied for dominant status, which it was able to successfully obtain in the past elections. They failed to get a dominant status this year, however, as they have the lowest number of candidates among all the parties that applied.

Aside from Lakas-Kampi and NP, those accredited as major political parties are the Nationalist People's Coalition and the National Unity Party. The Comelec can accredit up to 10 major parties.

Under the poll automation law, the dominant majority and minority parties are given the following benefits:

Major political parties, on the other hand, are only entitled to copies of the ERs and the certificate of canvass. - Rappler.com