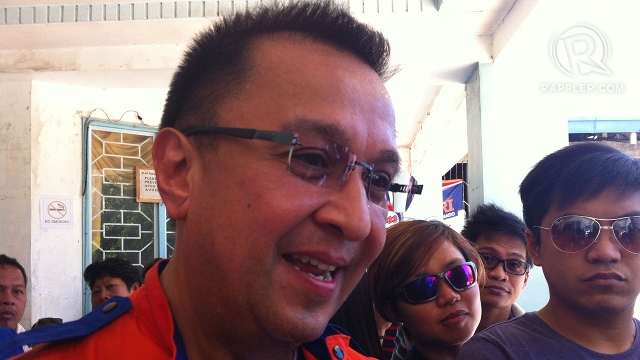 DISTANCING CAMPAIGN. Cagayan Rep Jack Enrile is deliberately campaigning on his own, saying his family name can be a "double-edged sword." RAPPLER/Ayee Macaraig

DAVAO CITY, Philippines – If Senate President Juan Ponce Enrile is laying low in the political scene lately, it’s not just because of his health. Enrile’s own son, a senatorial candidate, asked his dad to keep quiet amid controversies.

“At this point in his career, I don’t want him to have problems that he is being attacked by Miriam, by Alan Peter so I said, ‘Just keep quiet. They’re also busy. They have other things to do. You also should be busy. You have other things to do,’” Cagayan Rep Juan Ponce “Jack” Enrile Jr told reporters over dinner here.

The younger Enrile is referring to his dad’s ugly feud with Sen Miriam Defensor Santiago and Senate Minority Alan Peter Cayetano over the Senate fund controversy that blew up in January. Enrile chose to exclude 4 critics from the release of additional Senate funds.

Until now, Santiago is lambasting him over this and other issues like Port Irene and his memoir but the Senate President has kept his silence recently.

Admitting that the controversies inevitably affected him and his campaign, Jack Enrile said he advised his father to stop attacking his critics in public. He has acknowledged that the issue was a factor in the drop in his survey ratings.

“I said it would be to the best interest of all parties, him and other parties included, if they just keep quiet and treat each other as honorable members of the Senate. There’s no cause for name-calling, personal attacks. It doesn’t do anybody any good. It’s happened before and it’s happening now. Look what happened to Koko and Migz the other day.”

Enrile said he is deliberately distancing his campaign from his father. Incidentally, doctors also advised the Senate President to rest because of macular degeneration.

“This thing about names, boss, it works both ways. When the name is acceptable and popular, it works. If all of a sudden, you latch onto it and something happens, it affects you as well so it’s double-bladed, a two-edged sword,” he said.

He said he is ready for attacks against him too.

“There’s a difference between me and my father that people don’t really know. He’s more emotional than I am, meaning he is quicker to talk whereas me, I’m more deliberate in what I say.”

Enrile is campaigning on his own, relying on his campaign manager, old-time friend Johnny Garcia. He said Garcia used to work with the Security Bank and as chief of staff of the late Sen Ramon Mitra Jr.

He said he will not have ads where his father will endorse him.

Even in the choice of his tagline, Enrile said he decided not to use his father’s popular “Gusto ko, happy ka!” 2010 slogan.

“Initially, we were thinking, just for a certain continuity, name recall [to use it] but then we needed to differentiate. There was a call for differentiation and basically our advocacy, while ‘Gusto ko May Pagkain ka’ may sound okay, it is still lacking so ‘Murang pagkain, Maraming pagkain,’ (Lots of food, cheap food). That’s what caught on,” he said.

While he is standing on his own in the campaign, Enrile said his father still often checks on him.

“He calls me up everyday. ‘Where are you? What are you doing?’ I think he misses the action. He’s a political animal. He enjoys this (campaign).”

Unlike Enrile, San Juan Rep JV Ejercito and Nancy Binay also of the opposition United Nationalist Alliance (UNA) have been taking a different tack, capitalizing on the popularity of their fathers in the campaign.

In the sorties in the Davao region, the two often apologized to the crowd for the absence of former President Joseph Estrada and Vice President Jejomar Binay.

Estrada is in Manila while Binay went to the Vatican for the papal inauguration last March 19.

They also often mention their fathers in their speeches. Binay is fond of saying she got her training in politics from her dad and will help him out in his housing advocacy if elected senator.

While she has her own campaign team, Nancy Binay told Rappler her father still ultimately oversees her campaign.

“I get my advice pa rin siyempre sa father ko, sa ating Vice President Binay, lalong-lalo na nasa isang bahay lang kami. Paggising ko sa umaga, binibigyan na niya agad ako ng tips, mga dapat gawin, ‘di dapat gawin.” (I get my advice of course from my father, our Vice President, especially we are all under one roof. When I wake up in the morning, he gives me tips, what to do and not do.)

Binay admitted she gets pressured by her father, who advises her to campaign hard and early.

“Dapat daw 6am, umiikot na ako. Walang ending tsaka laging paulit-ulit, ‘Di ka dapat nagpapahinga, wala kang day off.’” (He tells me I should be going around as early asy 6 am, and he tells me not to stop. ‘You should not rest, you have no day off.’)

Making do without dad

In his speech at the Rizal Park in Davao City, Ejercito said he knew Davaoeños wanted to see his father, who won in the presidential race here in 2010 even if he had no local candidates. Mindanao is traditionally known as “Erap country” because of its support for the former President.

Despite his father’s absence, Estrada told reporters the Davao sortie was still a success.

“The crowd still gave us a warm reception. They stuck with us until the last candidate, I was the last speaker. It was fun but of course, it’s more special if the 3 kings are here. But still, you can see we can draw people even without President Erap and VP Binay.”

This early, Ejercito already expects his father not to be around often.

“The local elections are near and of course we know their rivalry there (in the Manila mayoral race) is heated so he will focus there. But it’s okay, we can return to Davao. This is a big area.” – Rappler.com