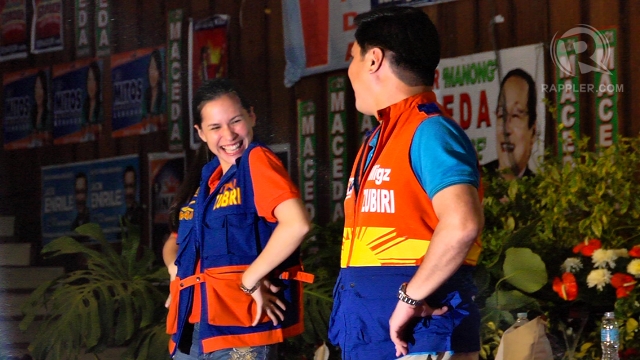 MANILA, Philippines – The campaign trail is home not just to candidates but to their families as well.

In a country where familiar names dominate the senatorial and local races, clans take an active role not just in fielding relatives but also in making sure they win.

Yet besides the obvious role of the trio, other family members have become a constant presence in the campaign, proving the old adage true: politics is all in the family.

Rappler goes behind the scenes and takes a look at campaigning family-style:

Although she is seldom present in UNA sorties, she accompanies her husband in media interviews. In the Baguio leg, Audrey spoke in Ilocano to endorse Migz and gamely danced “Gangnam Style” with him.

“She has her own schedules and sorties and usually represents me whenever I can’t attend an event. She is tireless in her efforts and I have to give her credit for managing to campaign for me while taking care of the kids and running our household,” Migz Zubiri told Rappler. 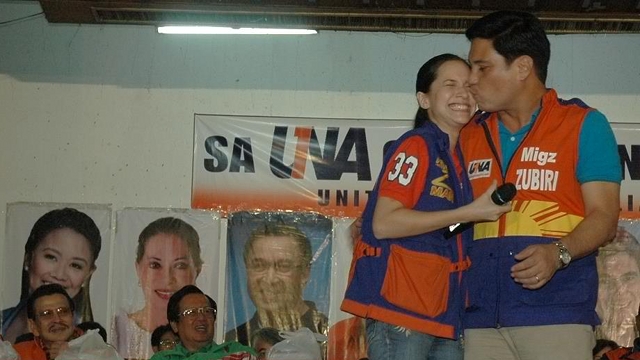 CAMPAIGN MUST? Audrey and Migz Zubiri share a kiss on the UNA campaign stage in Baguio. Photo from Zubiri's Facebook page

Aside from Audrey, the husbands of vice presidential daughter Nancy Binay and Zambales Rep Milagros “Mitos” Magsaysay often join their spouses in the campaign too.

Unlike Audrey though, businessmen Pepito Angeles and Jesus Vicente “JV” Magsaysay are low-key, seen assisting and keeping their wives company in the grueling campaign.

Binay’s husband (Pepito Angeles) is in the construction business. Magsaysay’s spouse, JV, is the son of former Zambales Gov Vicente Magsaysay, and a former senior director of the Subic Bay Metropolitan Authority. He is the grandnephew of the late President Ramon Magsaysay.

Asked about her husband’s role in the campaign, Nancy Binay quipped, “Photographer. He is the official photographer because we have no budget.”

Cagayan Rep Juan Ponce “Jack” Enrile Jr said his wife of 24 years, Sally, is not active in his campaign because she is busy running to replace him.

“My wife is running for Congress in the first district [of Cagayan] so she has her own campaign to worry about. I’m on my own. Once in a while you will see her. She will join some of our sorties,” Enrile said.

Peping Cojuangco and their celebrity children, Mikee and China, however do not appear in the UNA sorties even if Tingting always mentions them in her speeches. In contrast, Mikee was active in the presidential campaign of her cousin, Benigno Aquino III, in 2010. 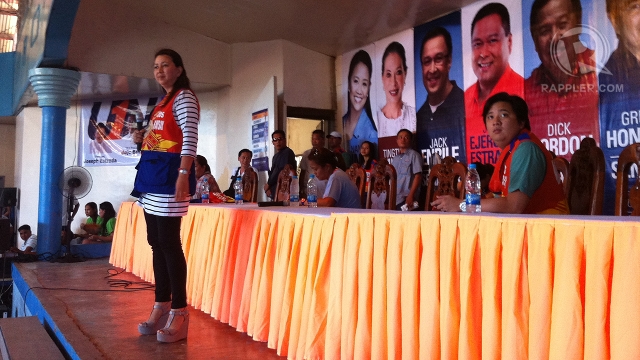 Politics runs in the blood of the UNA candidates’ children.

The most visible UNA kid is the booming voice in the alliance’s events: Erwin Maceda. The third of 5 sons of former Senate President Ernesto Maceda, Erwin is the emcee in all UNA sorties, and also acts as advance coordinator and candidates’ liaison.

Erwin, 47, resigned from the Office of Vice President Jejomar Binay to go full time in the campaign. He is proud to be the only candidate’s child who is “100% present in my parent’s campaign.”

“I am intimately involved with every facet of my dad’s campaign, our version of dad-and-son intense bonding. Last hurrah na ni Manong ‘to. Win or lose, this final campaign of his career na siguro ang huling posibleng intense shared experience naming mag-ama to have in his twilight years. Kaya hindi ko pinalampas,” Erwin Maceda told Rappler.

(This is Manong’s last hurrah. This final campaign of his career is possibly our last intense shared experience as father and son in his twilight years. That’s why I did not miss this opportunity.)

Magsaysay’s sons also climb the campaign stage. Twenty-somethings Anton and Vic-Vic Magsaysay are often with their mother, and sometimes act as her proxy in the motorcade. Vic-Vic is running for Olongapo vice mayor while another son Jobo is vying to replace his mother as representative of the 1st district of Zambales.

“Ever since they were young, we’ve been campaigning for my [father-in-law] who used to be the governor of Zambales so they know what a campaign is like and that’s where I get the strength to campaign because I know they understand what I’m going through …. I’m happy because they are supportive,” the Zambales congresswoman said in a press conference in Baguio. 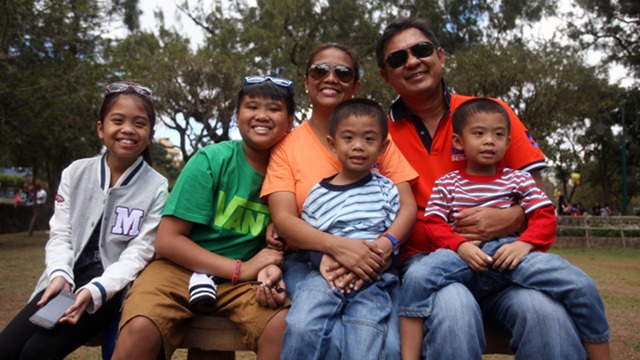 Other candidates, especially the young parents, have a hard time balancing family time with campaigning.

Nancy Binay’s 4 kids are a central part of her campaign, as she harps on her “Ina, Kapatid, Anak” line and children advocacy. She said one experience stood out.

“When I came home from Bataan, my daughter hasn’t seen me for two nights, I saw a note on our headboard: 'Mom and Dad’s schedule. Monday to Sunday.' She even wrote a column 'Here' and 'Not Here' and she had a checklist of when I was at home. She asked me, ‘Mom, what’s your schedule? Are you here next Monday and Tuesday?’ So I felt guilty.”

It was the same 9-year-old daughter who gave Binay the go-signal to run for senator despite her father's and her own hesitations. Binay said she made it up to her family, sometimes taking her kids along on the campaign trail, now that they’re on vacation.

Unlike Binay, Zubiri and San Juan Rep JV Ejercito seldom bring their children and just struggle to spend time with them in Manila.

They have two children each. Ejercito’s sons are aged 13 and 5, while Zubiri’s daughter is aged 4 and his son is aged 3.

Zubiri recently brought up his kids in the context of his word war with rival Sen Aquilino “Koko” Pimentel III, saying he also has children who suffer from their mudslinging. Zubiri then drew flak for saying in a TV interview that Pimentel’s estranged spouse was a “battered wife.”

Zubiri told Rappler, “I usually end up stretching myself pretty thinly just to see my kids and use every chance I have just to be with them. If it means going back home from wherever I am just to play with them for two hours, then that’s what I do.” 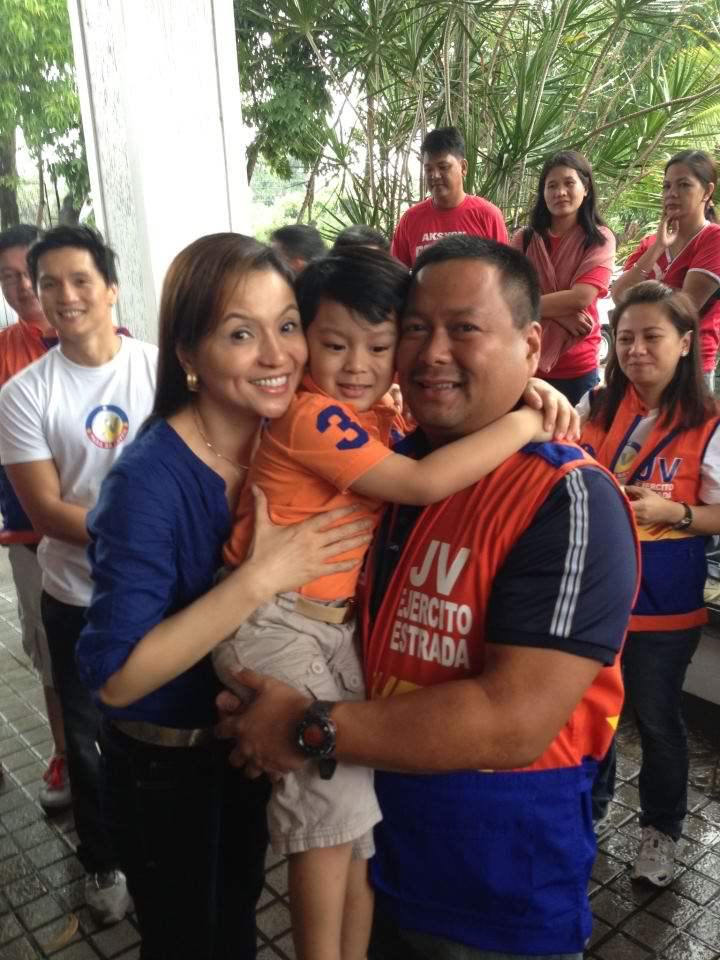 'VERY DIFFICULT.' San Juan Rep JV Ejercito says it is very difficult to balance family time with campaigning. In this photo, wife Cindy Lotuaco, and their son Julio Jose join him on the campaign trail. Photo from Ejercito's Facebook page.

By the candidates’ own admission, the campaign offers their relatives, especially their children, early exposure to politics. It's no surprise for politicians’ kin to transition from being campaign staff to government employees if their relatives win.

Eventually, some end up as politicians themselves. After all, this is exactly what happened to Nancy Binay.

(When my dad became mayor, it wasn’t just him who entered public service. It became a lifestyle for my family that’s why I'm apprehensive now -- because I know my kids will also be part of that world, not by choice, but I guess by accident, because they are my children.)

Will the family that campaigns together stay together in office? Only voters will decide. – Rappler.com