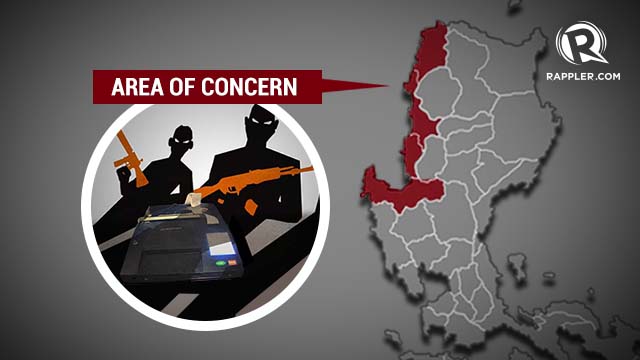 DAGUPAN CITY—The police has identified 52 municipalities and cities in the Ilocos Region as "priority areas of concern" in the coming campaign period due to the perceived intensity rivalries for candidates.

Chief Superintendent Ricardo Marquez, director for Region 1 of the Philippine National Police (PNP), told reporters on Monday, March 25, that atuhorities will be validating the numbers weekly from here on.

The cities and towns to be monitored are in 3 of the 4 provinces in the region: Ilocos Sur, La Union, and Pangasinan. Marquez said they will watch Pangasinan most closely.

Marquez said the 3 provinces became priority areas of concern because of election-related violence recorded in the areas in the past 3 elections, like shooting incidents especially victimizing elected government officials and other election players.

He pointed out that there are a number of unopposed mayoral candidates in Ilocos Sur and La Union, so rivalries are assumed to be not too intense, but the police will be keeping an eye on races where relatives are running against each other.

Long before the official start of the campaign, re-electionist Pangasinan Gov Amado Espino Jr and his only rival, Alaminos City Mayor Hernani Braganza, have engaged in verbal tussle. Marquez said he is hoping this is only “word war” and would not escalate into anything physical or violent.

Marquez said additional troops will be deployed in the identified priority areas of concern to prevent armed encounters between opposing parties.

Marquez said that of the 62 private armed groups being monitored by PNP nationwide, 7 are under close watch in Region 1. He said they are making sure that guns for hire "know that we know them.”

He said gun-for-hire business is fluorishes during elections, with gunmen not discriminating between personalities involved but just consider the money offered by "contractors" and clients.

“For every violation of the law there should be strong intervention in whatever legal form,” he added.

He said the police in Region 1 has served more than 100 search warrants in two months, the highest in the country for the first time, to make sure those involved in illegal activities would be checked and proper interventions are set in motion. Half of the search warrants were served in Pangasinan.

Meanwhile, a 64-year-old woman was shot dead, while two others were wounded, in Sitio Ligaya, Barangay Bacnar, San Carlos City on Tuesday, March 26. Police said the incident was linked to a land dispute.

The victim, Josefina Castro, succumbed to multiple gunshot wounds from an M16 rifle. Also hit by splinters were Rodelia Dalisay, 32, and Rynbert Dalisay, 6. They are confined at the Virgen Milagrosa Medical Center. Probers recovered 12 empty shells at the crime scene. - Rappler.com