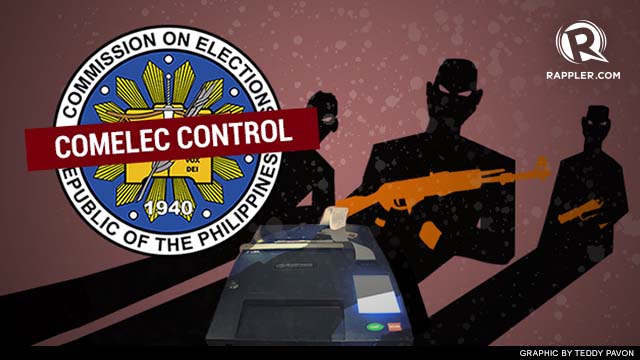 MANILA, Philippines – The Commission on Elections (Comelec) will junk most requests for the poll body to exercise a special kind of control over certain areas, Comelec chair Sixto Brillantes Jr said Wednesday, March 27.

In an interview after the Comelec's en banc session, Brillantes took a jab at politicians who have barraged them with requests to place their localities under Comelec control. This special power would allow the Comelec to “exercise full control and supervision,” among other things, over national and local law enforcement agencies in the areas concerned.

Requests for Comelec control come from areas such as Tagbilaran in Bohol, and the provinces of Lanao del Norte and La Union. Manila Vice Mayor Isko Moreno has also asked the Comelec to place the capital under Comelec control

“Most of these will be denied anyway,” he said of these requests.

Politicians should forward requests for Comelec control first to the local police and military, Brillantes added, and not to the Comelec en banc. He said the Comelec will soon release a resolution on this.

Brillantes explained that to place an area under Comelec control should be an option of last resort.

“So if they ask for Comelec control, it means they are already saying that there is total breakdown of peace and order in the area. There's no such thing,” he added.

Under Resolution No. 9583 that discusses Comelec control, the poll body says it “may place under its immediate and direct control and supervision any political division, subdivision, unit, or area affected by 'serious armed threats.'”

“The term 'serious armed threats' shall refer to the presence of paramilitary forces, private armies, or identifiable armed bands widely perceived to have committed terrorism, fraud, or other election irregularities and threaten or tend to disrupt the holding of free, peaceful, honest, orderly, and credible elections in any political division, subdivision, unit, or area,” the Comelec said in the resolution promulgated Dec 18, 2012.

The law allows the Comelec to do the following in areas under its control:

Violence has characterized Philippine elections through the years.

On Monday, March 25, for instance, the police identified 52 municipalities and cities in the Ilocos region as “priority areas of concern.”

To prevent poll-related violence, one of the Comelec's key measures is to implement a gun ban. The gun ban, which began January 13, however, has failed to stop high-profile murders such as the murder of an Isabela town mayor. – Rappler.com