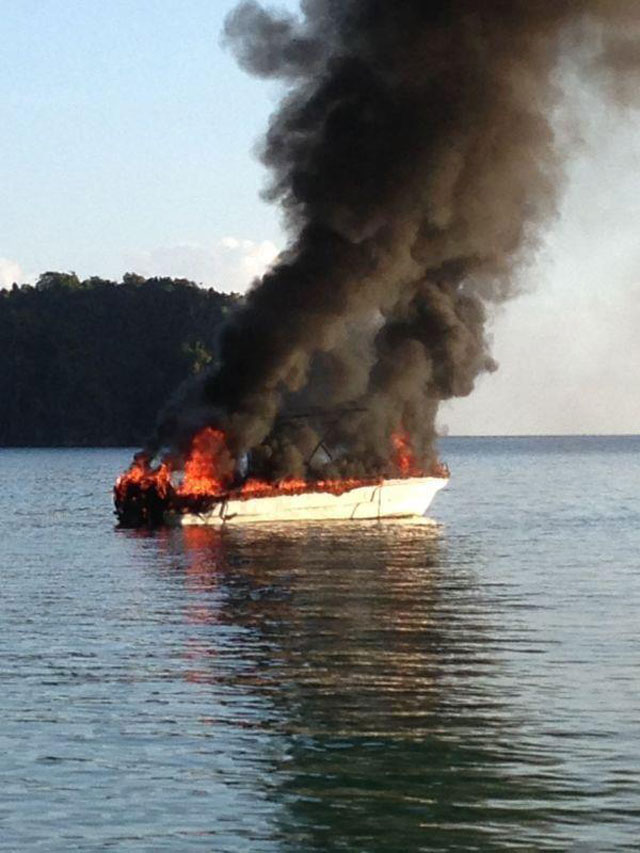 EXPLOSION. An explosion in Aga Mulach's boat off Caramoan in Camarines Sur left two injured. Mulach was not on the cruiser. Photo from Aga Mulach's Facebook page.

The explosion happened at past 6 am, Saturday, March 30.

Muhlach is running under the Liberal Party for a congressional seat representing the 4th district of the province, challenging Wimpy Fuentebella of the political clan that has ruled the province since 1907. The Fuentebellas are among the oldest political dynasties in the country.

The actor was not on the cruiser, a twin-engine 40-foot speedboat, when the explosion occurred. But the pilot, Jerome Pervera, sustained injuries on his leg, face, and back. Another unidentified guide was also hurt according to Juan. They are now being treated at the Caramoan Community Hospital.

Muhlach and his family are safe in an undisclosed location in the province, according to Juan. They are relieved that no one was seriously hurt, and are grateful for the outpouring of concern for their safety, Juan said.

Juan refused to speculate on the cause of the blast as the local police has started investigating the incident. Initial police findings revealed that the engine and gas tank of the vessel ignited. But no causes have been reported yet.

Juan hoped it has nothing to do with the threats Aga's campaign had earlier received.

"We hope it is not politically motivated," Juan said, adding that the local race is getting more intense by the day.

The explosion happened as the campaign period for local bets -- which is expected to be politically charged -- officially kicked off Friday, March 29. The Comelec however disallowed campaigning on Good Friday. - Rappler.com