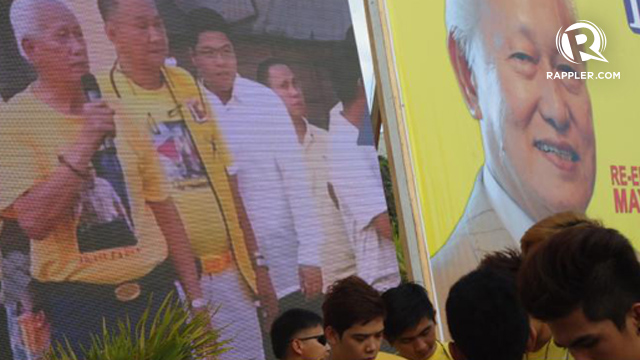 LIM ON PNOY. The Dirty Harry says he would rather be endorsed by a president with a clean reputation. Photo by Jerald Uy

MANILA, Philippines - If it ain't broke, don't fix it.

Calling on Manila residents to give their incumbent mayor one more term, President Benigno Aquino III campaigned on Monday, April 1 for Manila Mayor Alfredo Lim, a longtime ally of the Aquinos.

"Bakit mo aayusin kung ayos? Bakit mo papalitan kung magaling (Why fix what's not broken? Why would you replace someone who is competent)?" Aquino told a crowd of about 7,000 people gathered at the Liwasang Bonifacio in Manila for the proclamation of the local ticket led by Lim and running mate Lou Veloso.

Aquino said Lim proved his loyalty to the people when he sided with his mother over dictator Ferdinand Marcos during the 1986 People Power Revolution. Lim, a former police general, was also a staunch defender of Mrs Aquino when the latter faced various coup attempts during her term.

The President did not criticize Lim's rival -- former President Joseph Estrada -- but made it clear he trusts the re-electionist.

The so-called "Dirty Harry," now 83 years old, is banking on the clean reputation of Aquino in his bid for re-election, saying the President's endorsement is much better than what he had gotten from Estrada, when Lim ran for senator and mayor under Estrada's previous coalition.

"Kung kayo ba mag-aaply ng trabaho, tatanungin kayo ng mag-iinterview ng character reference - kailangang may magpapakatotoo na kayo'y mapagkakatiwalaan. Ilalagay n'yo ba sa inyong character reference 'yung taga-Muntinlupa?" (If you're going to apply for a job and the interviewer would ask for character reference that will prove you can be trusted, would you put the name of the one from Muntinlupa?). Lim was alluding to the fact that Estrada was convicted of plunder.

He reiterated that Estrada and re-electionist Vice Mayor Isko Moreno were lying when the local United Nationalist Alliance candidates accused him of sitting on the city's problems.

"Walang nagawa? Papano 'yung hospital natin? (We did nothing? How about our hospitals?") Lim said. "Sa Maynila, nagbibigay kami ng libreng ataul. (Kung) ayaw nyong maniwala, gusto nyo mag-apply kayo. (In Manila, we provide coffins for free. If you don't believe us, apply for one.)

Some senatorial candidates under Team PNoy joined the Manila rally to show support for Lim.

Other senatorial candidates at the rally were Sen Koko Pimentel, and former Senators Jamby Madrigal and Jun Magsaysay.

Will the city choose a charismatic former president who finished second to Aquino in 2010, or will it side with the latter and his bet?

Manila isn't the only thing at stake.

A Lim victory is an important political statement for the President -- symbolic of his political influence in local races. - Rappler.com