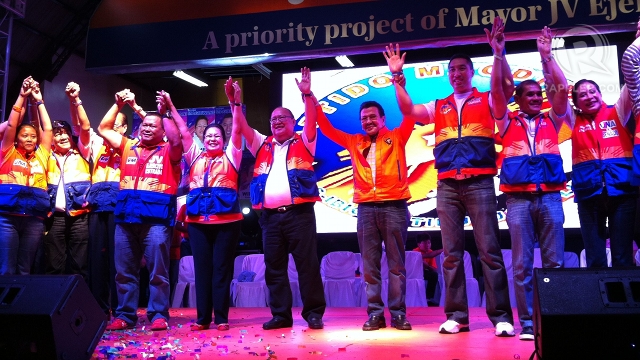 MANILA, Philippines – It is a classic example of how complex local and family politics can get.

In San Juan, the Ejercito-Estradas – at least those on former President Joseph Estrada's branch of the family – are setting aside personal differences for the upcoming elections.

They came together on Tuesday, April 2, for the proclamation rally of re-electionist Mayor Guia Gomez and her Partido Magdiwang slate in San Juan’s Tanghalan ng Masa. Gomez is the mother of Estrada's son Joseph Victor or JV, currently the city's congressman and a senatorial candidate.

The former President graced the proclamation to endorse Gomez and her party, which is allied with the opposition United Nationalist Alliance (UNA). UNA senatorial bets were also guests in the event.

Janella shared the campaign stage with Gomez. Her mother, Precy Estrada, was also present in the proclamation.

Even before the rally began, Gomez already sought to downplay the reported feud between Sen Jinggoy and her son JV.

“They’re brothers. If push comes to shove, they’ll always be brothers. I believe that in my heart. There might be sibling disagreements and political [misunderstanding] on the other side of the fence but, eventually, blood really runs thicker than water,” Gomez told reporters.

The mayor said the recent tension between the two was just “tampuhang magkapatid.”

Senator Jinggoy took offense with JV’s decision to turn down his offer to produce ads for his senatorial bid. Ejercito said he already allocated his airtime for his own ads, and will stick to his campaign team’s messaging. This led Jinggoy to say that JV “does not need my endorsement.”

Gomez said: “They will mature eventually. They are going into that stage probably between immaturity and maturity and they will reach that. When they reach my age, when they’ll be together in the Senate, they will have it. Believe me.”

The Ejercito-Estradas have long held power in San Juan. After the former President, Jinggoy became mayor for 9 years, followed by JV for another 9 years. 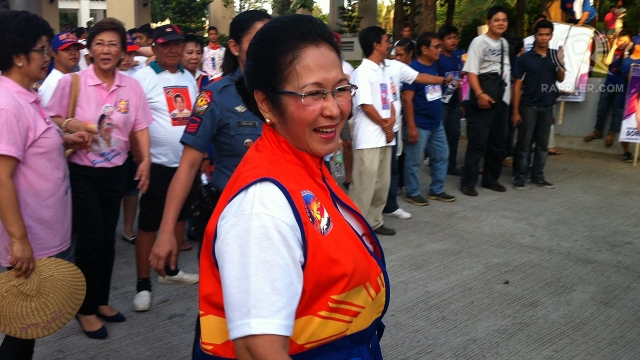 Former President Estrada, who has asked his sons to reconcile, told reporters that Senator Jinggoy will eventually campaign for his brother.

The former President made the statement even if Jinggoy said just days earlier that he was not inclined to do so because he is not needed in his brother’s campaign.

“Of course, magtutulungan iyan. Pinalalaki lang [ang away],” Estrada said on the sidelines of the rally. (Of course, they will help each other. People are just making a big deal out of the issue.)

Asked if Jinggoy will join UNA sorties and endorse his brother, Estrada said, “Oo. I guarantee you!”

Despite his brother’s statements, JV took a conciliatory tone and said he and Jinggoy are no longer fighting.

“If he joins us and endorses the whole UNA ticket, he is most welcome. Of course, it will be a big help if he raises my hand,” Ejercito said in an interview.

Ejercito said, though, that not all is well in his clan. UNA and Partido Magdiwang are not supporting his cousin Jannah Ejercito in her congressional bid in San Juan. Jannah will be up against Ronaldo Zamora. She is running under the Nationalist People’s Coalition.

Rep JV Ejercito said that Jannah showed inappropriate conduct when she was councilor and JV was mayor.

“This is not a dynasty because our rival here is my cousin,” JV said. “We don’t support her because what’s more important is the welfare of San Juan. It doesn’t mean that she’s my relative, I will support her. I will support those who can serve San Juan.”

“There’s an advantage and a disadvantage. In my case, my program is being continued. After me, Jinggoy then JV. If there’s another mayor, there’s no continuity.”

Despite the family’s long hold on San Juan, former President Estrada lost in the city during his second presidential bid in 2010.

“Whether UNA will have a straight ticket here, I cannot be sure of that, but we will do our best because I was mayor for 17 years,” Estrada said.

Yet JV is more confident, citing San Juan’s record under his family’s leadership.

In their speeches, JV and his mother cited a study by the Department of the Interior and Local Government showing San Juan topped its Local Governance Performance Management System, which measures financial accountability and other aspects of governance.

Still, Gomez acknowledged the city’s long history of support for the Aquinos.

“In spite of it being an Estrada country, after the [EDSA] Revolution, there is a lot of yellow here. When former President Estrada ran [in 2010], because President Cory died and President Noynoy became the candidate, San Juan went for him (Aquino).” – Rappler.com