Printing spoils less than 1% of ballots 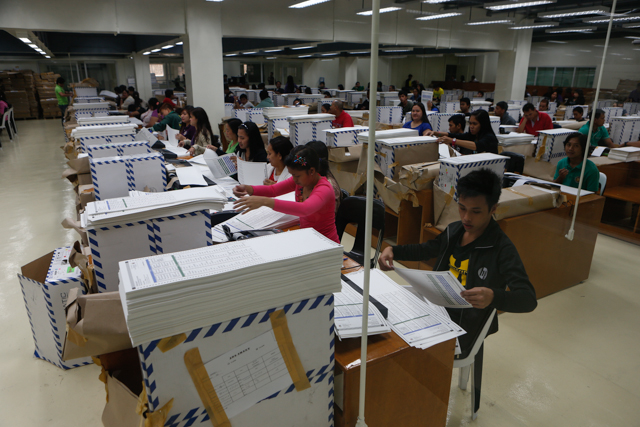 MANILA, Philippines (UPDATED) – Voting in May? Your ballot is waiting for you.

By Wednesday morning, April 3, the National Printing Office (NPO) finished printing all 52,333,801 ballots for the May 13 elections. In what it calls a record-breaking performance, the NPO finalized ballot-printing 22 days before its April 25 deadline.

According to data obtained by Rappler from the Commission on Elections (Comelec), the total number of registered voters for this year has reached over 52 million. It jumped from 50 million in the 2010 elections.

Supervised by the Comelec, the NPO printed ballots on a one person, one ballot basis. The Comelec, for its part, tested the ballots through precinct count optical scan (PCOS) machines.

Less than 1% of ballots failed the PCOS test, and had to be destroyed and replaced, said NPO assistant director Raul Nagrampa in an interview with Rappler.

This means there should be no stray or spare ballot come election day – which operators, in previous elections, used in vote-padding. If the ballot-counting machines work well, this also means the PCOS machines should reject no ballot on May 13. 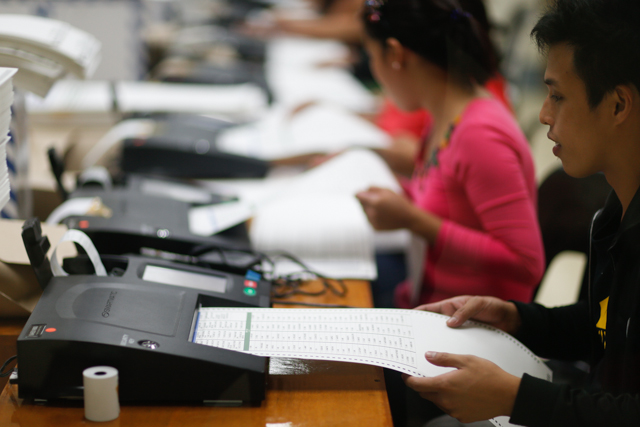 STRAY OR NOT? An employee tests the ballots to identify spoiled ones, which will then be destroyed. Photo by Rappler/John Javellana

For Nagrampa, the NPO's performance should quell fears over the integrity of ballot-printing, particularly the quality of the printing machines despite an initial controversy.

During the ceremonial printing of the last ballots on Wednesday, Brillantes thanked the NPO for finishing the job ahead of the deadline.

"Binabantayan lang ho namin na siguradong matutupad ang kanilang ipinangako sa amin. Hindi lang ho natupad ang pinangako sa amin kung hindi masyado pa nilang binilisan," Brillantes said in a brief message. (We just wanted to make sure they will keep their commitment to us. Not only did they keep their commitment; they did it faster than expected.)

Speaking to Rappler on Tuesday, April 2, Nagrampa said PCOS machines rejected only around 50,000 of the 52 million printed then, or 0.096% of the total.

The NPO destroyed these spoiled ballots in the presence of Comelec representatives, Nagrampa said.

He said a ballot failed the PCOS test for one of 4 reasons:

Nagrampa said misprints – or errors caused by the printer – led to only 12,000 spoiled ballots, or less than a fourth of the spoiled. (What does ballot-printing look like? Watch the video below.)

“The machine is really efficient and fast,” Nagrampa said, contrasting the performance of the printers with the initial perception created by reports.

In November 2012, a Youtube video showed PCOS machines rejecting 4 out of 10 sample ballots. The company contracted by the NPO for ballot-printing – Holy Family Printing Joint Venture – went under fire over this.

Speaking to Rappler in January, however, NPO director Emmanuel Andaya said the Youtube video merely showed an initial test. (Watch the video below.)

Looking back at initial criticisms, Nagrampa said: “What can you say? We (call it a) record-breaking performance.”

From its warehouse, the NPO moves the 52.3 million ballots to Comelec's custody. The poll body then brings the ballots to their temporary storage in Barangay Calumpang, Marikina City, from which the Comelec eventually transports these to different provinces. 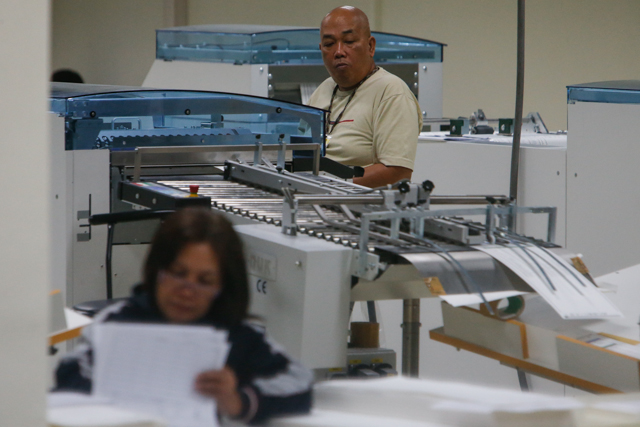 DONE AT NPO. While ballot-printing is finished, voter vigilance should continue. Photo by Rappler/John Javellana

The close watch over the ballot – which the Comelec chair calls the "heart" of elections – continues outside the NPO. – Rappler.com