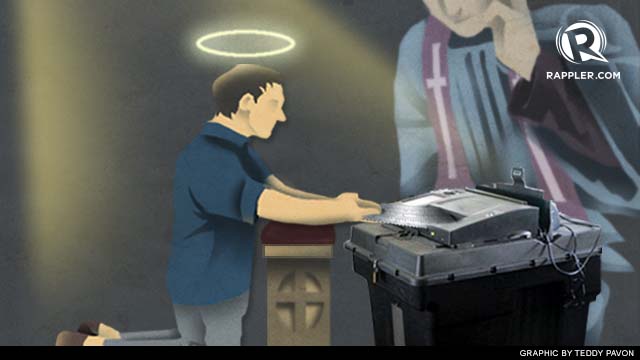 CEBU CITY, Philippines – Catholics associated with the Archdiocese of Cebu are bent on proving the Church’s electoral influence in the country’s vote-richest province.

A Church-backed group has endorsed 8 senatorial and 6 congressional candidates who are pro-life, and vowed to make them win to prove that the so-called Catholic vote is very much in place in Cebu.

Dr Rene Bullicer of LIVE 2013 (Live Initiative for Election 2013) shared with Rappler a partial list of candidates they are backing. The list will be completed by April 13.

Bullicer said Cebu Archbishop Jose Palma, who is also the president of the Catholic Bishops’ Conference of the Philippines (CBCP), “fully supports” the initiative.

“This is our response to the Archbishop's call to stand up for our rights. Our ultimate goal is to mobilize the Catholic vote,” he said.

The partial senatorial list includes 5 candidates from the United Nationalist Alliance (UNA) and 3 from Team PNoy:

Here in Cebu province and Cebu City, it is supporting congressional candidates in 6 of the 8 districts:

Bullicer said LIVE 2013 has launched a signature campaign, targeting to get 1.5 million of 2.5 million registered voters in Cebu to commit to support the list.

LIVE 2013 will also have its own campaign caravan throughout the province.

“Let us truly vote wisely. If we truly love our country and the future of our community, we really need to discern who are fit to serve the government. We should not vote based on party politics and patronage politics, but we should vote based on our conscience,” Bullicer said. – Rappler.com