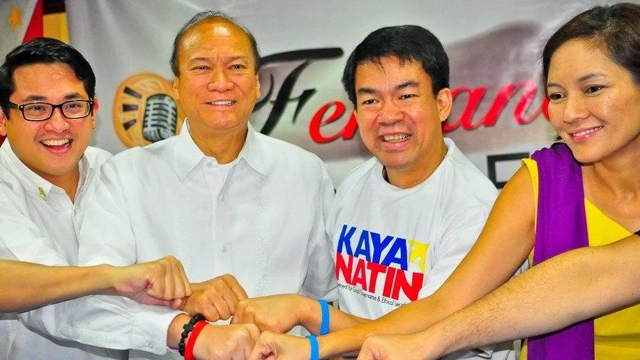 MANILA, Philippines (UPDATED) – To a non-government organization, it was a way of helping public school students. To the opposition, it was vote-buying.

The opposition United Nationalist Alliance (UNA) accused the Kaya Natin! Movement for Good Governance and Ethical Leadership of vote-buying in the distribution of gift certificates to public high school students.

Kaya Natin is an advocacy group for good governance and was allied with President Benigno Aquino III in the 2010 presidential race.

“This is a serious issue of vote-buying because they timed it with the start of the local campaign and there is clearly money involved,” Tiangco said in the statement.

The UNA campaign manager said Comelec should investigate the distribution of the gift cheques, pointing out that the people behind Kaya Natin are either former or current members of the ruling Liberal Party (LP): Comelec Commissioner Grace Padaca, Sen Francis Pangilinan, Father Ed Panilio, and Bam Aquino.

In an interview with Rappler, Tiangco refused to give details about the supposed vote-buying but stressed that he has proof.

“I won’t speak. I don’t want to expound. I have proof. I have the gift certificates. I just want to let people know,” Tiangco said.

Asked if UNA plans to report the issue to the Comelec, Tiangco said, “It depends.”

In an interview with reporters, Brillantes said the distribution of gift cheques may be classified as vote-buying. "Kung ganoon, talagang puwedeng vote-buying 'yon. Puwede. Imbestigahan natin," he said. (If that's the case, then that may be vote-buying. Maybe. Let's investigate it.)

Under the Omnibus Election Code, vote-buying is done by "any person who gives, offers, or promises money or anything of value... in order to induce anyone or the public in general to vote for or against any candidate or withhold his vote in the election."

Keh: What’s wrong with that?

In a phone interview, Keh told Rappler that Kaya Natin has been giving out gift certificates in public schools in Quezon City as part of its education program in cooperation with Quezon City 3rd District Rep Jorge “Bolet” Banal, who is seeking re-election, and the Quezon City government.

Banal is a member of the LP and a Kaya Natin champion.

Keh said the gift cheques do not bear the names of any senatorial candidates but only the logo of Kaya Natin, Banal, and National Book Store.

The Kaya Natin leader said the program was consistent with his advocacy of education reform. He cited his record in Pathways to Higher Education, and Acts of Hope for the Nation Foundation.

“We started distributing the GCs March 7. We only endorsed the 4 senators on March 20. So how can we even campaign for senators when we haven’t even created our list? If this was really meant to buy votes, we should have waited until we chose our 4 senatoriables.”

Asked about the inclusion of Banal’s name on the gift cheques, Keh said, “Granted, Cong Banal’s name was there. What’s wrong with that? That’s his project. If you look at the GC, the logo of LP, Team PNoy is not there, and it was distributed way before the local campaign period began.”

Keh challenged Tiangco to show proof or else resign as UNA campaign manager.

“Show us proof that the candidates’ names are there. Show us video that our staff or the staff of Cong Banal was telling people to vote for Bam. If he cannot show proof, he should resign. Is that the kind of leader we have? People who concoct lies?”

“If he can show proof, I will resign as lead convenor of Kaya Natin,” Keh added.

Keh said he has nothing against UNA but it should not focus on attacking his group. UNA earlier said Kaya Natin’s endorsement of the 4 candidates “confirmed the LP’s plan of junking candidates in favor of Bam Aquino.”

“No one can put conditions on my position as campaign manager, except the executive committee of UNA, especially not a person held in contempt by the impeachment court,” Tiangco told Rappler.

Tiangco was referring to Keh’s participation in the impeachment trial of former Chief Justice Renato Corona last year. The Senate threatened to cite him in contempt for submitting unverified bank records to the office of Senate President Juan Ponce Enrile.

The senators then scolded Keh but decided not to sanction him. – with reports from Paterno Esmaquel II/Rappler.com