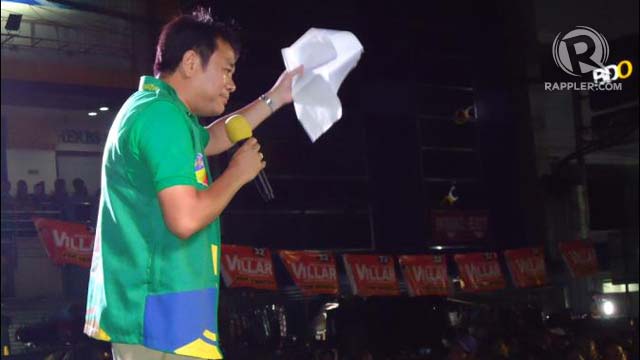 I GOT MY COPY! Mayoral candidate Edwin Olivarez says incumbent Mayor Florencio Bernabe Jr. does not want to disclose the content of the anomalous contract with a trucking company. RAPPLER/Jerald Uy

Candidate Parañaque City Rep Edwin Olivarez of the administration's Team PNoy swore it will not happen under his watch. He is running against city councilor Benjo Bernabe, son of the man who ordered the demolition -- Mayor Florencio Bernabe Jr.

"'Yun ba ang tuwid na daan? Walang pagkalinga sa kapwa? Hindi magkakaroon ng demolisyon dito sa Parañaque! (Is that the straight and narrow path? He had no compassion for the people... There will be no demolitions here in Parañaque if I'm elected)," he vowed before a crowd of 5,000 during his proclamation rally in Baclaran Saturday night, April 6.

Olivarez has made his campaign more about discrediting Mayor Bernabe rather than his actual rival.

"When a man died and hundreds were injured at the Silverio Compound, where was our mayor? We didn't even see his shadow. He was inside the comforts of his air-conditioned office, giving interviews to Channel 2 and Channel 7," Olivarez said in Filipino.

But Benjo Bernabe of the United Nationalist Alliance (UNA) is not afraid that the notorious demolition will haunt his campaign. He launched his campaign at the Silverio Compound no less.

The Silverio demolition is not the older Bernabe's only wrongdoing, Olivarez told the crowd. He accused the mayor of entering into an allegedly questionable contract for the city's garbage collection. It's too expensive, he said.

Holding what he said is a copy of the contract between the city government and contractor Corinthian Trucking & General Services, Olivarez said the city is paying P32 million a month for the services. "That means we are paying P1 million a day," he said.

Olivarez and Councilor Benjo debated on the same issue when they guested on ABS-CBN's Umagang Harapan. The young Bernabe claimed the city only pays P60 million a year for garbage collection.

Olivarez promised the crowd a "New Parañaque." He said he will establish a city college and modernize the community hospital. He also promised to push for a city ordinance that will require commercial establishments in the city to prioritize residents in hiring employees.