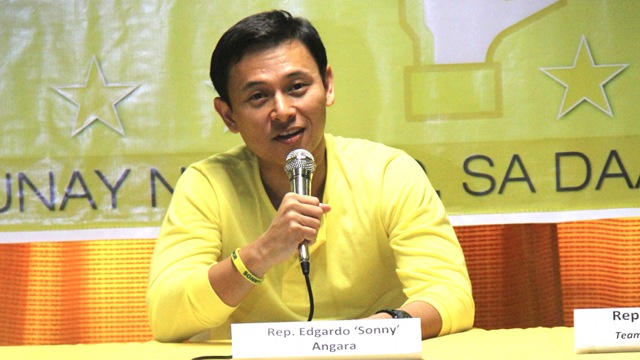 FULL DISCLOSURE. Rep Sonny Angara said he is willing to disclose both his Statement of Assets, Liabilities and Net Worth for 2012 as well as his Income Tax Return. Photo from Team PNoy Media Bureau

MANILA, Philippines (UPDATED) - Candidates of Team PNoy who are incumbent government officials are expected to make public their Statements of Assets, Liabilities and Net Worth (SALN) for 2012.

"That is our expectation. If the President discloses, then we should too," Team PNoy spokesperson Miro Quimbo told Rappler on Tuesday, April 9.

The last day for government officials and employees to submit their SALNs for 2012 is April 30.

Of the Team PNoy candidates, those who will need to submit SALNs for the year 2012 are senators Alan Peter Cayetano, Chiz Escudero, Loren Legarda, Koko Pimentel, and Sonny Trillanes, as well as Aurora Rep Sonny Angara and former Movie and Television Review and Classification Board chair Grace Poe.

Angara, congressman of Aurora province, even said he's open to making public his income tax return (ITR), and that other candidates should do the same.

The SALN is a declaration of assets and liabilities required of government employees as part of transparency measures. It is a public document that is mandated to be available to any person requesting a copy, but government offices have made it difficult even for journalists to access them.

Aquino has said that SALN submission is equivalent to disclosure. In 2011, his SALN was made public, after questions were raised how he was able to purchase a sports car. He also disclosed his SALN in 2012 following the impeachment of former chief justice Renato Corona.

Corona initially refused to release his SALNs to the public but was ultimately impeached for failing to honestly disclose his assets, liabilities and net worth of up to P80 million.

Since then, there has been public clamor for public officials to provide copies of their SALNs online or to make it readily available.

"I would support the filing of the disclosure of the SALN not only that also the ITR of all the candidates for senator," Angara said in a press conference.

He also said he hopes efforts to obtain SALNs of public officials will not be as hard as when they tried to access Corona's. Angara was part of the prosecution team during the impeachment trial and provided media with a copy of his SALN a week after the ouster of Corona.

As the elections near, SALNs of public officials seeking re-election or a higher position may face further scrutiny.

On Monday, April 8, United Nationalist Alliance bet JV Ejercito was questioned on Twitter by journalist Raissa Robles about his SALN, specifically over an "undervalued" property in Redwood, California.

Ejercito argued he bought the property almost 20 years ago, but Robles argued the acquisition value "does not match the purchase value on record."

To this, the candidate tweeted back, "Up to you na lang to write whatever you want. I just hope you're not being selective." - Rappler.com