PNoy left with just one bet in Iloilo sortie 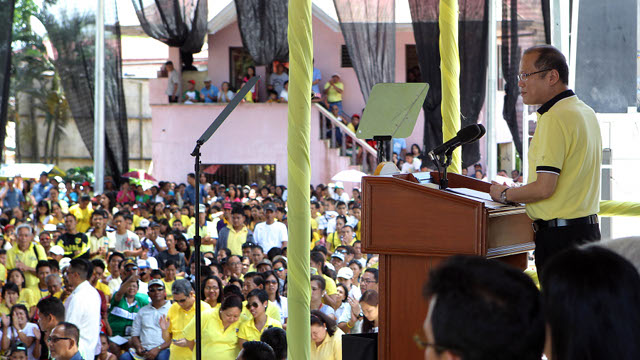 VISAYAS VISIT. President Benigno Aquino III endorses his slate in Capiz, where he was joined by 3 candidates. Malacañang Photo Bureau

MANILA, Philippines - It was a Team PNoy rally but it might as well have been called PNoy rally.

The problem? Only one candidate showed up -- former senator Jamby Madrigal.

Earlier, Aquino flew to Capiz for the groundbreaking of the P215-million Roxas Airport development project. He was joined by Angara, Villar and Madrigal in a rally there, along with proxies of Hontiveros and Bam Aquino.

The President then headed to Iloilo to meet with local Liberal Party leaders in a jam-packed Sta Barbara gym, but the crowd was unable to meet with all but one candidate.

On Friday, April 5, Aquino told reporters on the sidelines of a sortie in Laguna that he is unperturbed about the lack of attendance of his candidates in sorties.

"The needs of every candidate are different. Some candidates are strong in some places, weak in others. As candidates, you want to maximize your presence," he said.

"We've given them freedom to decide. Those who come with me, they probably need or want to come to these places either to maintain or increase their popularity," he said.