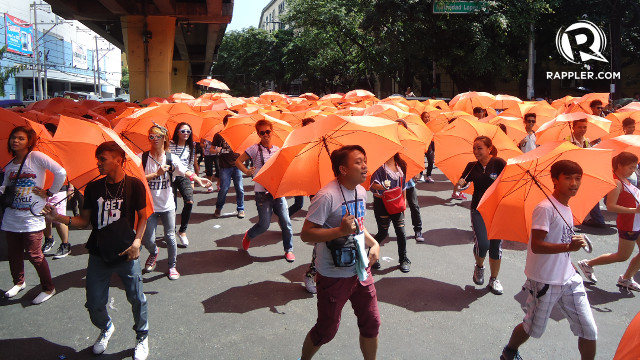 MANILA, Philippines - It was either amusing or annoying.

On Friday, April 12, around 300 students staged a "flash mob" dance around noon in the busy intersection of Lopez and Aroceros Streets near Manila City Hall as support for former President Estrada's bid to be the mayor of the nation's capital.

Motorists were not amused with the traffic it created. Drivers honked their horns as the Kabataan ng Jeep ni Erap, which organized the flash mob performance, dance away in about 10 minutes.

Aside from motorists, some vendors in the area shouted "Mga Epal (attention-grabbers)" at the dancers.

"Wala naman kaming pinapanigan kina Erap at Mayor Lim (We don't side with anyone - neither Erap nor Mayor Lim)," vendor Emma Co told Rappler. "Pero sana ilagay ang kampanya sa tamang lugar, hindi itong nakakaistorbo sa daan (But I hope they bring their campaign in the proper venue, not in the busy road)," she said.

In defense, the Kabataan ng Jeep ni Erap founder Angel Espiritu said, "That will really happen but I mean, the whole point is to create awareness. We weren't instigating or trying to cause trouble."

He added that they came on their own volition and that the former president did not know about the public performance.

“We come from different schools and universities, and we observed that we have a common candidate for Manila. So, instead of wasting our time on the mundane, we decided to hold this exciting ‘flash mob’ dance routine to support Erap and Isko,” group leader Marlon Villanueva said.

'Bring back the fun in Manila'

He added that residents in Manila should lighten up because it's "masyadong madi-Lim (too dark)," alluding to Estrada's rival, incumbent Mayor Alfredo Lim.

“We adopted the dance routine since a lot of us are into the performing arts. I wish that more youths will join us in the future,” Villanueva said.

Kabataan ng Jeep ni Erap told Rappler that the flash mob dance is just "an opening salvo to edgier and youthful campaigns" for Estrada and Moreno from their group. - Rappler.com