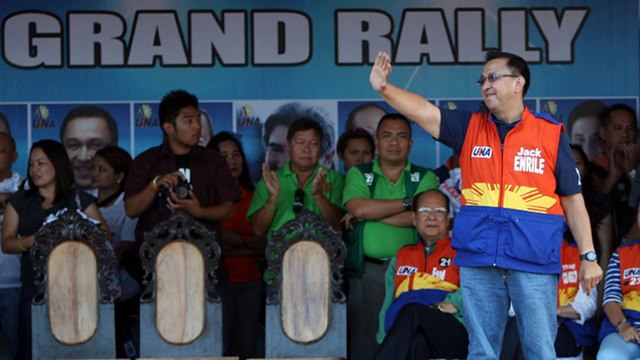 ILOILO CITY, Philippines – It's all fiction. At least that's as far as senatorial bet Juan Ponce "Jack" Enrile is concerned.

Last week, WikiLeaks released a cable with then US Ambassador to Manila William Sullivan saying he was convinced Enrile killed Lucas. The cable was part of a tranche of classified information released by Wikileaks globally covering, in Manila's case, the 1970s.

Sullivan's cable discussed the killing of Lucas at a Makati party exclusive to Ateneo students. The teenage Enrile asked Lucas of De La Salle University to leave. Lucas died of a bullet shot in the forehead that night. Enrile’s aide owned up to the killing.

In a press briefing before a campaign sortie here, Enrile reiterated that court records will “bear me out.”

“Lumang tugtugin na iyan. It’s 4 decades old. It happened to a young boy when he was 16 years old. That young boy grew up to be a man. His life has changed …. Bakit tuwing eleksyon na lang?” (That’s old news. Why raise this every election?)

On Sullivan’s statement that he did not attend court proceedings, Enrile said, “It was upon the advice of the legal team. I was a 16-year-old boy at that time. Perhaps it was the strategy of the legal team to insulate me from the proceedings. It was not something I wanted to do.”

Lucas’ father claimed in a 2011 court deposition that the elder Enrile allegedly offered him two blank checks to drop the case.

Jack Enrile said, “My father is Ilocano. Not to be flippant about it, I’m well aware of the finances of the family. Even if my father wanted to do that, [he could not]. He in fact did leave the country in order to [avoid] any suspicion that he was involving himself in the investigation.”

The Cagayan congressman has also been linked to the killing of his sister's ex-boyfriend, celebrity Alfie Anido, a charge he also denied. (Read: Enrile files P31-M damage suit vs columnist)

“The Manalad incident happened to a security personnel by the name of Fermin Garma. He was the one involved there. He was assigned to me. I was just in the vicinity but unfortunately, the altercation was between that gentleman named Manalad and Fermin Garma.”

A 2001 Newsbreak report said Enrile was linked to the death of businessman Ricardo Manalad Jr, killed at the Stargazer Disco in Silahis Hotel in 1981. The senatorial bet was allegedly also involved in the shooting of a certain Santillan who refused to move his jeep blocking Enrile’s car.

Enrile is working double time in the homestretch of the campaign. It's going to be a tight race to the finish. In the March Pulse Asia survey, Enrile ranked 11th to 16th, a drop from higher numbers before the start of the campaign period.

“We are tying up the areas where we are strong. In the last week [of the campaign], I will ask permission if I can spend time in the North,” said Enrile.

Enrile has branded the renewed allegations as a demolition job “done in order to derail my plan to look into and expose a government project that is highly questionable and grossly disadvantageous to the public.”

Asked to elaborate, Enrile said it's a "proposed project." He added: "If they plan to push this, it will require an amendment to the law, which they have not yet pushed for.”

He said this involves “very high-ranking officials." Enrile said he will make the exposé soon. - Rappler.com