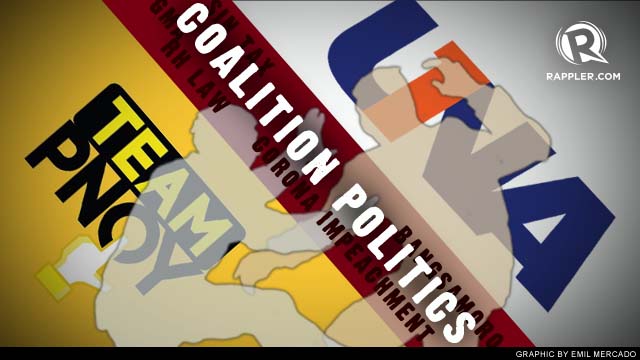 MANILA, Philippines - It's an old issue. In Philippine politics, party affiliations are fluid, and so are party stands on issues.

As an administration-backed coalition, does Team PNoy have candidates who share the Aquino administration's position on key issues? As the self-styled "constructive opposition," has UNA fielded bets who live up to that role?

These are the questions that FactCheck 2013, an initiative of the Political Democracy and Reforms (PODER) Program of the Ateneo De Manila University - School of Government, aimed to answer when they looked into the positions of candidates from the two coalitions on 5 issues that the academics believe represent Aquino's programs:

Based on information available in the media, FactCheck 2013 found that the stand of Team PNoy candidates in the issues were "largely consistent" with the position of the Aquino administration.

Except for those who have not stated their positions publicly, most Team PNoy candidates were in favor of the impeachment of former Chief Justice Renato Corona, prosecution of former Ombudsman Merceditas Gutierrez, and former President Gloria Macapagal-Arroyo and the FAB.

Among the 12 Team PNoy bets, only re-electionist Sen Chiz Escudero is against the sin tax law. He voted against the measure in the Senate.

Meanwhile, 3 out of 12 Team PNoy candidates are against the divisive reproductive health law, which took more than a decade to pass in Congress.

Most UNA bets against RH

What about UNA? Based on information available in the media, FactCheck 2013 found that the coalition does not have a "unified, coalesced" stand for or against the 5 issues identified above.

For instance, 4 out of the 9 UNA bets are against the sin tax law (Gringo Honasan, JV Ejercito, Mitos Magsaysay, and Ernesto Maceda), while 5 are in favor of the measure (Miguel Zubiri, Richard Gordon, Tingting Cojuangco, Nancy Binay, and Jack Enrile).

The UNA candidates also have varying stands on the Corona impeachment, Gutierrez's and Arroyo's prosection, as well as the FAB.

The most unified stand that UNA holds is on the reproductive health law. Except for Enrile, all UNA bets are against the measure.

Since the early stages of the election season, UNA never made any claims of being a "genuine opposition" to the Aquino administration. Instead, UNA considers itself as a "constructive opposition" that intends to provide "more choices" for the electorate.

FactCheck 2013 will release more data on other electoral issues in the coming weeks. - Rappler.com