Binay: Unlike Team PNoy, no empty stage for UNA 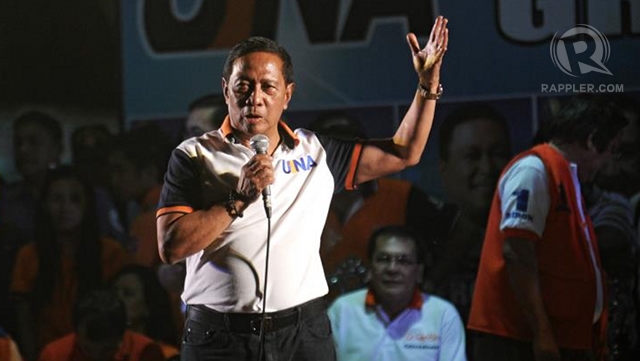 ‘UNHEARD OF.’ Vice President Jejomar Binay says it is unheard of for the President of the Philippines to campaign with just one senatorial bet in tow. The statement was a swipe against Team PNoy, whose 11 candidates did not show up in an Iloilo sortie with the president earlier this month. File photo by Rappler/Franz Lopez

Vice President Jejomar Binay vowed that unlike Team PNoy, his opposition United Nationalist Alliance (UNA) will never allow its leaders to go on the campaign stage alone or with just a lone senatorial bet.

Binay took a swipe at the administration ticket, questioning why it allowed President Benigno Aquino III to campaign in Iloilo earlier this month with just one senatorial candidate in tow: former Sen Jamby Madrigal.

(This is the first time I heard of that, the President is there and only one candidate shows up? That has never happened to us. It will never happen to us.)

Binay said what Team PNoy did to Aquino is unprecedented.

(It is a matter of fact. I do not know of any instance in the history of campaigns, whether local or national, that the President of the Philippines came with only one candidate. What is that?)

UNA senatorial bet Zambales Rep Milagros “Mitos” Magsaysay was the first to make an issue out of the absence of the 11 senatorial bets in the Team PNoy sortie.

In UNA’s Iloilo sortie over the weekend, Magsaysay said UNA candidates, out of respect, will not do the same to their leaders.

“It shows the other party has no respect for their leader. When PNoy is around, they don’t even bother to extricate themselves from whatever schedule to be with their leader,” Magsaysay said last Sunday, April 14.

Aquino though has said he does not mind if only a few candidates campaign with him.

“The needs of every candidate are different. Some candidates are strong in some places, weak in others. As candidates, you want to maximize your presence. We’ve given them the freedom to decide. Those who come with me, they probably need or want to come to these places either to maintain or increase their popularity,” Aquino said.

Team PNoy candidates also said the decision to campaign on their own is a strategy as they focus on areas where they are weak or strong.

Besides the absence of many candidates in Team PNoy sorties, Binay again made an issue out of the small crowds in the administration events.

Yet after criticizing the administration, Binay seemed to draw back from the attack.

“But this is not for us to comment or make demands, I’m just telling you things that others have frowned upon but we will not give an extra reason.” – Ayee Macaraig/Rappler.com